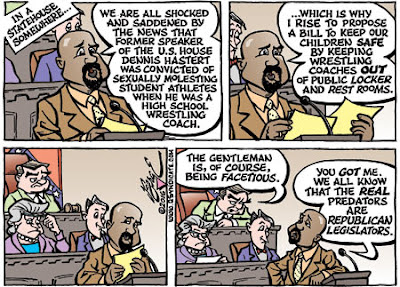 It should be noted that the state legislator in this week's cartoon is begin facetious from Frame One. The statute of limitations on Former Speaker Hastert's alleged sexual assaults expired decades ago. He was convicted of circumventing banking rules in order to pay hush money to one of his victims. He paid $1.7 million to a student whose groin he barely remembers having merely brushed in order to treat a pulled muscle, if you buy his defense.

Then there is the weird story of the leather recliner Hastert positioned in the locker room so that he could watch his wrestlers while they showered. Don't bother trying to imagine how he explained that expense to the school administration; school athletic departments have always gotten considerably more deference than, say, the English department.

Nevertheless, the deal with the recliner was pretty ballsy. I remember that after gym class at my junior high school in the 1970's, we had to parade through a shower room, towels held up above the spray, while the gym teacher stood on an raised platform enclosed by a wall that came up about his chest-level in the center of the shower room, watching to make sure that we were actually getting wet or something.

There were whispers that our coach was enjoying the show more than necessary, but at least he had to stand up. He wasn't relaxing comfortably in an overstuffed La-Z-Boy.

Coming back to the present, Rep. Jeremy Durham (R-Natcherly), a vocal co-sponsor of the Bathroom Bill speeding through Tennessee's state legislature, has just been found to have a habit of sexually harassing women who have the misfortune to work in his vicinity. The allegations are so numerous that the Secretary of State has issued an official warning that "Representative Durham's alleged behavior may pose a continuing risk to unsuspecting women who are employed by or interact with the legislature." The Speaker of the Tennessee House Beth Harwell has banished Durham from his office, exiling him to an office across the street.

No word on whether he gets to take his La-Z-Boy recliner with him.
Posted by Paul Berge at 7:58 AM