The old calendar on the wall tells me that it's Snickerback Saturday yet again, and I haven't got a theme I'm raring to fulminate about. So, for no reason in particular, I'm hauling out cartoons I drew ten, twenty, and thirty Aprils ago.

Starting with the oldest: 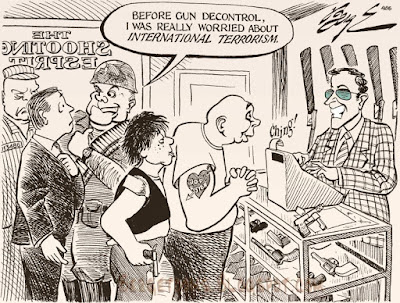 In April of 1986, the House passed a bipartisan bill supported by the Reagan administration and pushed by the National Rifle Association (but opposed by law enforcement officers) to repeal many parts of the Gun Control Act of 1968. The Senate had already passed a similar bill ending federal control on the sale and transport of rifles and shotguns and creating the "gun show loophole." The McClure-Volkmer Act further protects dealers from federal prosecution unless authorities could prove "willful" violation of remaining gun laws, and prohibits any state or federal government from keeping "any system of registration of firearms, firearms owners, or firearms transactions or disposition."

✒
By this point in April, 1996, the presidential primaries had settled on the major parties' nominees. President Clinton had no significant opposition for the Democratic nomination; that the Republicans would nominate Kansas Senator Bob Dole did not come as a surprise. The Republican nominee-apparent did, however, present a challenge in one part of the world: 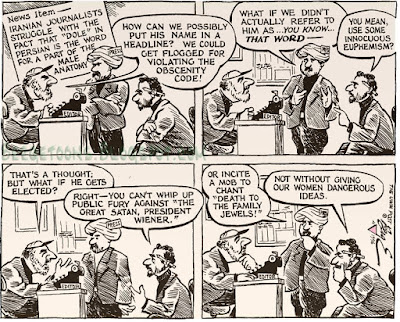 ✒
With this cartoon from April, 2006 we tie together sex and an oblique tangent off the first cartoon's theme of terrorism: 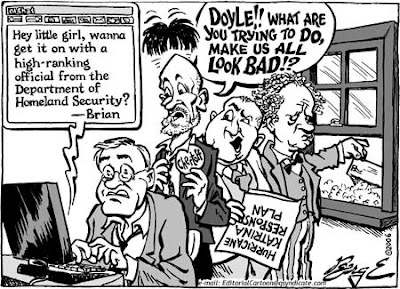 In order to cast DHS Secretary Michael Chertoff as Moe of the Three Stooges, I employed a cartoon cliché for depicting surprise and shock.

The Brian Doyle scandal was one of those quickly forgotten peccadilloes of the George W. Bush administration. Amid the ineffectual response to Hurricane Katrina and some careless treatment of an envelope containing white powder, the Press Secretary for the Department of Homeland Security was caught soliciting sex from minors on the internet. Doyle, 55, was found guilty of seven counts of using a computer to seduce a child and sentenced to five years in Florida state prison for inappropriate e-mails he sent to an under-cover officer posing as a 14-year-old girl.


✒
While researching the background of the 1986 cartoon above, I happened to run across a letter to the editor in the April 21, 1986 issue of Time magazine from a 20-year-old Delavan lad who would someday become governor. I draw no conclusion from this and have no snide remarks to make; I simply share it for the sake of trivia: 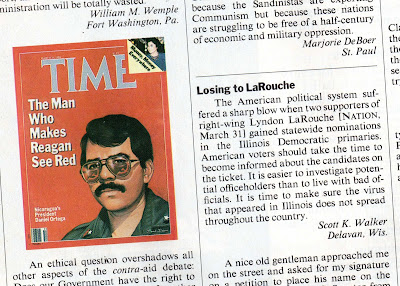