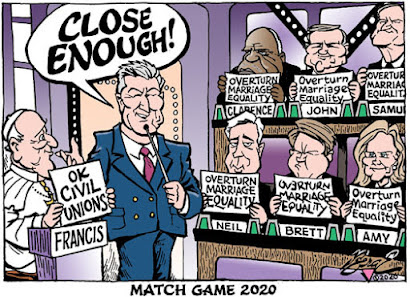 There were a lot of plaudits from religious liberals for Pope Francis last week after he gave his blessing for civil unions for same-sex couples.

Subtitles in the documentary "Francesco," premiered at the Rome Film Festival, translate the Pope's comments as: “Homosexual people have the right to be in a family. They are children of God and have a right to a family. Nobody should be thrown out or be made miserable over it. What we have to have is a civil union law—that way they are legally covered. I supported that.”

This is a reiteration of his previously offered opinion on the topic, although some conservatives quibble that "civil union" is an inaccurate translation of his phrase, "convivencia civil"; they claim he merely referred to "civil cohabitation," whatever difference that makes in the context of having a law about it.

Here in the United States, marriage equality has been the law of the land since the Supreme Court's 2015 ruling in Obergefell v. Hodges, but two, perhaps now three, of the Justices are eager to overturn that ruling. The others in the Court's right-wing majority might have been less inclined to annul over half a million marriages overnight, but they might be amenable to taking Pope Francis's cue by floating the possibility of foisting something less than marriage upon us as a consolation prize.

My husband and I got married shortly after the ruling in Obergefell came down, having gotten a civil union six years earlier. The two are not the same thing: there is no federal law recognizing civil unions; the IRS has no provision for couples civilly unioned filing jointly. (See, there isn't even a verb for it!) Hospitals, especially those with a faith-based affiliation, are free to interpret HIPAA laws to exclude non-married couples.

It's no just a question of having to deal with bakers and florists who believe in being assholes for the Lord.

Well, anyway, kudos to Pope Francis for being more enlightened than your immediate predecessor.

I just wish we didn't have Supreme Court justices heading us back to the Dark Ages.