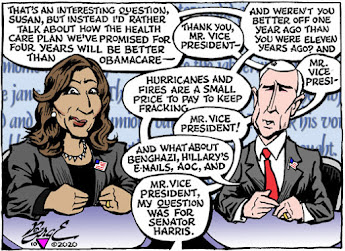 Considering how many cartoons I drew with Mike Pence in them during the 2016 campaign and in the early years of the Corrupt Trump Administration, it has been a surprisingly long time since I've drawn him lately.

Never fear. After this week's Vice Presidential So-Called Debate, it was only natural that he should make another appearance — if for no other reason than to celebrate the fly that perched on his head for two minutes and nine seconds, during which it held a nation's undivided attention.

The main difference between these so-called debates and an actual debate is that in an actual debate, you have to respect whatever time limit you have been given, which Mike Pence and Donald Typhoid Mary Trump completely ignored. Short of getting the Oscars' orchestra to start playing candidates off when they prattle on too long, however, there seems to be nothing the moderators of these things are able to do.

You don't get to interrupt the person on the other side of the debate, either, but I guess Pence gets points for interrupting Kamala Harris only a small fraction of the number of times Trump interrupted Joe Biden.

But most importantly, You Have To Stick To The Question You Have Been Asked. Wander off into a completely different topic, and you flunk the debate right away. If you're in a spelling bee, you don't get to choose some word you'd rather spell instead.

Harris evaded a couple of Susan Page's questions about whether Democrats were going to "pack" the Supreme Court and so forth, but Mike Pence didn't just wander off topic, he vaulted over the fence, sprinted far afield, and blatantly refused to answer any question when he felt like talking about something else.

As I said, Susan, the climate is changing. We’ll follow the science, but, once again, Senator Harris is denying the fact that they're gonna raise taxes on every American...

Or, at 14:21, Page asked Pence, in light of Trump's current health crisis, "...have you had a conversation or reached an agreement with President Trump about safeguards or procedures when it comes to the issue of presidential disability? And if not, do you think you should?" Pence ignored the question and went on and on about promising a coronavirus vaccine and warning that the 2009 swine flu epidemic would have been a lot worse if it had been a lot worse.

I do wonder about the debate prep these people go through. For the Harris-Pence event, the candidates prepared with former Florida Attorney General Pam Bondi playing the part of Senator Harris and former South Bend Mayor Pete Buttigieg standing in for the Vice President.

Do these stand-ins play their parts honestly, or do they act out the partisan caricatures they perceive of the other side?

Do they charge ahead over their allotted time and talk over the candidate they're training?

Yeah, that they probably do.