Q Toon: The Family That Comes Out Together 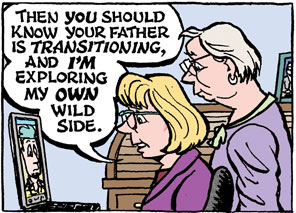 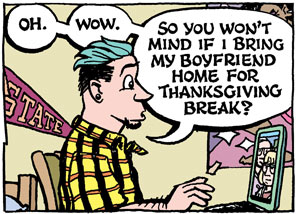 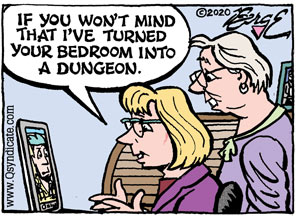 Late last week, I had a cartoon idea about presidential debates all set to propose to my syndicate editors. But then came Donald Trump's midnight tweet that he has COVID-19, and I had to scrap that idea in case it was rendered obsolete or at least in bad taste by events this week. A subsequent idea I liked could have run into the same problem by today; I drew it anyway and posted it here on Sunday.

National Coming Out Day is October 11, and I'm pretty sure it's not going to be cancelled or anything, so this is what I sent off to Q Syndicate for this week.

So anyway: In olden days, people coming out to their families had to brace themselves for the possibility that their families would reject them.
Now you have to brace yourself for just about anything — from "Get the hell out of my house," to "Yeah, we know," to — well, this young man's parents.

Who might be sending a subtle message in case anybody was thinking about moving back home next summer.
Posted by Paul Berge at 4:30 AM

Email ThisBlogThis!Share to TwitterShare to FacebookShare to Pinterest
Labels: coming out, National Coming Out Day, Transgender