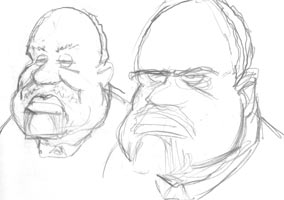 This week's cartoon features someone I've drawn a dozen or so times over the nearly three decades he's been a nationally public figure, and I'm overdue to reevaluate how I draw him.

I've tended to fall back on the heavy-rimmed glasses that Clarence Thomas wore during his confirmation hearings in 1991, but I notice that he never wears them in photographs taken recently. People do get contacts, and even if they don't nearly everybody who wears glasses has to replace them every few years with something that might be more fashionable.

It's also difficult to tell in his photographs whether Thomas has kept his moustache. If so, it has certainly gone gray and thinned out over the years.

I hate to speak ill of a fellow cartoonist, but let me put it this way: if you find yourself in a rut, it's time to get out and stretch your legs a bit.

On a completely different note, I got featured in Comic Strip of the Day two days out of three this weekend! Son of a gun!