Amy Coney Barrett has been spending this week telling a Senate panel that as a nominee to the highest court in the land, she can't imagine how she might rule in cases involving abortion rights, gun control, the Affordable Care Act, or marriage equality,  or any of the other hot-button issues she has written about — not even whether Donald Trump can unilaterally postpone a federal election fergawdsake! — because the role of a Supreme Court Justice is not to prejudge cases before they come before the Court. 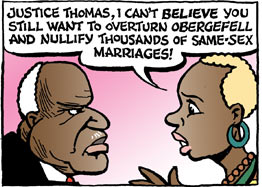 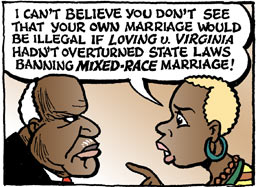 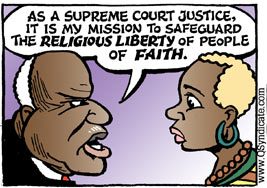 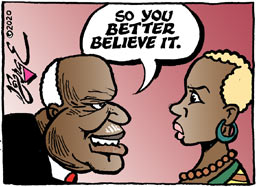 Meanwhile, Justices Samuel Alito and Clarence Thomas, who no longer have any Senate confirmation hearings to worry about, just told the nation last week how eager they are to get a case before them that would allow them to overturn Obergefell v. Hodges, the 2015 case that established marriage equality under the Fourteenth Amendment to the Constitution. Now that two of the five Justices who ruled in the majority are no longer on the Court, Thomas and Alito are not only telegraphing how they would rule in a case challenging Obergefell, they are openly inviting such a case to come their way.
If it seems peculiar that I should ignore the newest nominee to the Court to draw a cartoon about the Justice who has been around the longest, it's partly because opposition to the Coney Barrett nomination is already a lost cause, and always has been. So was opposition to the nominations of Brett Kavanaugh and Neil Gorsuch, and support of the nomination of Merrick Garland.
Since the election of Richard Nixon in 1968, Republicans have been committed to packing the courts of this country, at every level, with right-wing activist judges come hell or high water. They have had a few disappointments along the way: Nixon named Lewis Powell to the Supreme Court to advocate aggressively for business interests, only to have Powell write the decision in Roe v. Wade. Ronald Reagan fulfilled a campaign pledge by putting Sandra Day O'Connor on the Court, only to have her earn a reputation as the swing vote there. Gerald Ford nominated John Paul Stevens, and George H.W. Bush named David Souter to the Court, only for them to side with the Court's liberals.
Right-wingers came together and vowed "No More Souters," and for thirty years — a full generation — there hasn't been. Republican senators scuttled George W. Bush's nomination of Harriet Miers not over the issue of cronyism, but because she had not previously demonstrated a commitment to toeing the party line from the bench. So we got Thomas's fellow home-wrecker Samuel Alito instead.
If the present Coney Barrett nomination is a lost cause, the resistance to right-wing activism must look to the future. As the longest-serving Justice on the Court, Clarence Thomas may very well be the next to retire. But don't count on it; Justice Steven Breyer is ten years older than he.
What you can count on is that there will be at least one other Supreme Court appointment in the next four to eight years, and I for one would prefer to see a Democratic president when that happens, and — given Republican Senators who promised four years ago not to let Hillary Clinton fill any vacancies on the Court even if she won the 2016 election — a Democratic-majority Senate.
In the meantime, you can count on the Supreme Court to gut the Affordable Care Act, women's reproductive rights, gun control legislation, and marriage equality. That's what the mission of Republican court-packing has always been, confirmation hearings testimony notwithstanding. Again, I would prefer to see a Democratic president and a Democratic-majority Congress in office to pick up the pieces when those rulings come down.
But that's a discussion for another day. Shall we make it Saturday?
Posted by Paul Berge at 4:38 AM