So Donald Joffrey Trump has a date with Rona... Laissez la Schadenfreude rouler! 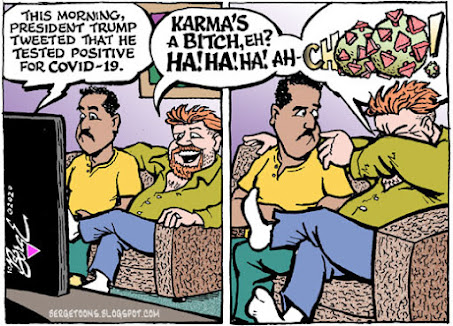 Before we get carried away, however, Business Insider notes that "Trumpworld delighted in cruelty; now that Trump has COVID, it demands empathy":

Whether he was mocking a disabled reporter's affliction and delighting in Hillary Clinton's health travails on the 2016 campaign trail or separating migrant children with Down syndrome from their parents and ridiculing Joe Biden's son's struggle with drug addiction during his time in office — Trump supporters can't get enough of the Dear Leader triggering the libs, or really anyone with a conscience.
To his fervent supporters, Trump's callous viciousness is funny. It's the humorless politically correct scolds and loser Never Trumper conservatives who need to lighten up, they say.
Now that President Trump and first lady Melania have tested positive for COVID-19, Trumpworld has discovered the value of empathy. And they are shocked — shocked! — that some of Trump's critics have delighted in the irony of Trump's coronavirus denialism contributing to his own infection.

Just last Tuesday at the so-called debate, Trump criticized Joe Biden for wearing a mask in public; and Trump's entourage refused to wear masks at the debate in spite of that being a requirement for everyone in attendance.

Nevertheless, I don't feel delighted that Trump — and more and more people present when Trump nominated Amy Coney Barrett to the Supreme Court — has caught a virus that has been quite lethal to Americans in his age and weight bracket.

Because karma (yes, I know I mean hubris) is indeed a bitch. But she doesn't discriminate and shows no favors.