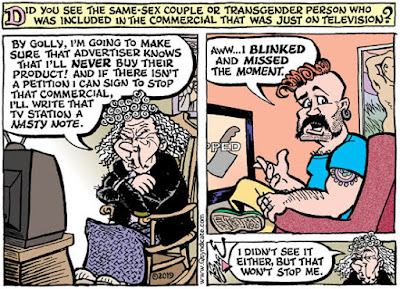 The LGBTQ community is more visible in television advertising these days than we were only a very short time ago.

Chalk it up to a greater sensitivity to diversity. When I was a tyke, the only faces we saw in television commercials were white, except for Jose the coffee farmer and the laundry woman whose "ancient Chinese secret, eh?" turned out to be a grocery store fabric softener. In the '70's, black faces began to show up: first football celebrities like O.J. Simpson and Mean Joe Green. Soon a hillside of multiracial folks offered "to teach the world to sing in perfect harmony," but it would still be a while before non-white actors would sell us cars, insurance, and other expensive stuff.

Now that societal attitudes toward the LGBTQ community have softened, folks like us have begun showing up in commercials, too. Their appearances are usually fleeting and might leave viewers thinking, "Did I just see what I think I saw?" The young woman who leaps enthusiastically into another young woman's arms at the airport in an amazon.com commercial ... are they a couple? Wasn't that a guy in make-up for nearly a full second in an Ulta ad?

Maybe the two gals dancing together at the house party in the Grey Goose commercial just happen to like dancing. And Spectrum Mobile made a point in its latest commercial of mentioning that the two guys featured in its ad campaign just happen to live together; they're not family. The framed pictures over their kitchen table of shirtless 1890's boxers don't mean a thing.

Advertisers and content carriers still get flack from older and more sensitive viewers when our presence in a commercial is impossible to overlook, even with the mute button on. Such was the case with an ad by Zola that ran on the Hallmark Channel. The setting for the commercial was the wedding of two women, which set off the alarm bells at One Million Moms Inc.

OMM has been battling against gays and lesbians in TV commercials ever since J.C. Penney hired Ellen DeGeneres as its spokesperson back in 2012. The then-110-year-old retailer was hoping that some gay cachet would give it a trendy vibe. It didn't work.

Flush with their seven-year-old success, Megamoms fired off a protest last week to Hallmark, which announced that it was pulling the ad "to avoid controversy." Zola, an on-line wedding gift registry company, replied by pulling the rest of its advertising from the Hallmark Channel, which shocked Hallmark into an immediate reversal.


“The Hallmark Channel will be reaching out to Zola to reestablish our partnership and reinstate the commercials,”  said Mike Perry, president and CEO of Hallmark Cards, which controls Crown Media Networks, the parent company of Hallmark Channel, in a prepared statement.  “Across our brand, we will continue to look for ways to be more inclusive and celebrate our differences.” He acknowledged the ban had caused “hurt and disappointment.”

I'm so glad that because I drew last week's cartoon about the Hallmark Channel, I gave this week's cartoon a more general focus. I didn't catch news of Hallmark's reversal until after I'd sent my cartoon off to the syndicate.

Besides, like the lady in the cartoon, I hadn't actually seen the commercial.
Posted by Paul Berge at 6:48 AM