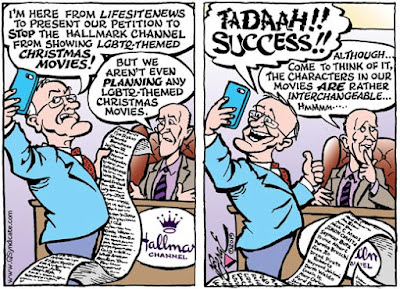 A right-wing religious website you may never have heard of announced last week that it had collected 30,000 on-line signatures petitioning the Hallmark Channel not to show any Christmas movies featuring LGBTQ characters.


Controversy and outrage erupted in conservative circles after a November 15 interview with Hallmark Channel CEO Bill Abbot for The Hollywood Reporter's TV's Top 5 podcast. Abbot stated that he would be "open" to the idea of a gay-themed Christmas movie, although the channel has yet to produce one and has no immediate plans to do so. The channel is said to be releasing over three dozen Christmas-themed films this year, none with gay major characters.

Out Magazine decided to have a little fun with the petition's organizer, LifeSiteNews, by testing how easy it would be to add scurrilous signatures to it.


"To wit, individuals can sign the LifeSiteNews petition as many times as they want, so long as they list a new name and email address. For instance, Out was able to fill out the petition half a dozen times under names like “Rick Santorum,” “Audrey IV,” “Deacon Rumpy Pumpy,” “Rev. Mr. Kool-Aid Man,” and “The Ghost of Titsmas Past.” A few emails were rejected (sploogeandmarley@gmail.com was sadly a no-go) but most others were accepted. The emails frothymixture@aol.com and poop.licker@yumyum.com were among those met with a cheery response."

The Hallmark Channel is not known for groundbreaking or provocative entertainment. It's a G-rated channel you can safely have on while hosting five generations of your family at your house. Its movies tend to follow a predictable plot outline: the central character is a newly single or career-driven woman, or a pre-teen child who doesn't get along with his/her step-parent. The central character encounters someone of the opposite sex whom she/he initially can't stand. The two are seemingly incapable of avoiding each other, and they fall in love. There's one last obstacle to overcome. They overcome it.

Festoon that plot with tinsel and you have a Christmas movie.

Hallmark can get in trouble when it colors outside the plot lines, and not just from its regular viewers. One of this season's movies is about a woman who hires an actor to pretend to be her boyfriend at her family Christmas get-together; he's Jewish and somehow doesn't know anything about Christmas. Jewish advocacy groups have called the movie anti-Semitic.

We can look forward to the sequel in which she brings ham to his family's Passover seder and rearranges the table when she notices that there is one chair too many.