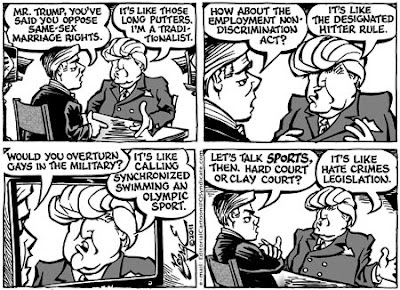 I suppose the Donald is making some attempt to reach out beyond the Religious Right on this issue. After all, if secularly-inclined voters are going soft on antigay attitudes, you have to find some argument other than Leviticus and the letters of St. Paul to pull them back in line.

P.S.: I've been uploading cartoons to replace the dead AAEC links in some eight or nine years' worth of posts, and I have no idea why this 2011 post has reappeared as a 2019 post. This cartoon was about a comment Trump made during his unsuccessful run for the 2012 Republican presidential nomination, not something he has said lately.

I do know that this isn't the first time this particular cartoon posted strangely.
Posted by Paul Berge at 3:40 PM