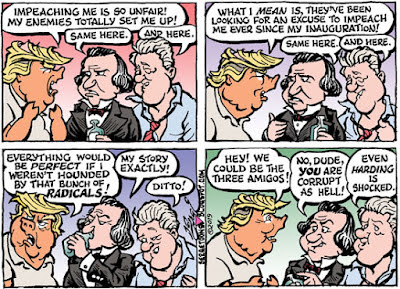 So the House voted to impeach Donald Trump, and I was publishing a cartoon about TV commercials.

Now it's Christmas Eve, and I've got this bit of holiday cheer for you.

Yeah, the premise of Trump talking to one living ex-president and one dead one is kind of weird. For those of you who flunked American history, they are Andrew Johnson (impeached in 1868) and Bill Clinton (impeached 130 years later).

Johnson, a Democrat elected Vice President with Abraham Lincoln on a "Union Party" ticket, quickly ran afoul of Radical Republicans in Congress who passed laws to prevent him from replacing Lincoln's cabinet members. He fired the Secretary of War anyway, and Congress came up with over a dozen counts of impeachment against him.

The radical Republican majority in Congress in the 1990's launched an investigation into President Clinton's wife's real estate dealings in Arkansas, which somehow ended up being all about his sexual affairs. He lied to the Special Prosecutor about it and didn't have an Attorney General who would put out a disingenuous summary of the Prosecutor's report, so Republicans gleefully impeached him.

The Senate fell short of booting either one from office, and the Republican majority is extremely unlikely to oust their buddy Trump; so you might be wondering why we're even bothering with any of this.

The answer is that there is no other way for Congress to register a complaint against presidential misbehavior. The Supreme Court has opined that incumbent presidents can't be prosecuted in a court of law; Congress considered and rejected the option of "censure" against Clinton. A Republican Congressman tried shouting "Liar!" at Barack Obama during a State of the Union address once; but pretty well everyone else agreed it was such a bad idea, Trump spews out lies uncontrollably and nobody in Congress ever calls him on it.
Posted by Paul Berge at 6:00 AM