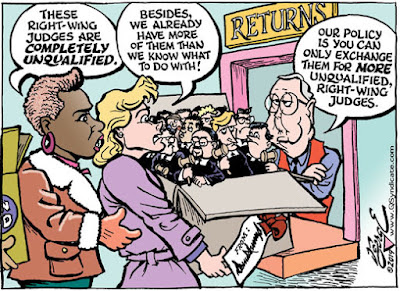 While the House was busy debating impeaching Donald Trump, the Senate was pretty busy itself.


The Senate confirmed 13 district court nominees this week, including former ACS chapter leader Stephanie Dawkins Davis to the Eastern District of Michigan. This brings the total number of confirmed lifetime judges during this administration to 187.
With 2019 ending, it is important to take stock of the historic overhaul of the federal judiciary. In 2019, the Senate confirmed 102 lifetime judges, 20 of whom were to the circuit courts. This is an incredibly rapid pace and means that 1 lifetime judge was confirmed every 4 days.

Just about every one of these judges are hard-core, doctrinaire right-wingers: hostile to marriage equality, reproductive choice, unions, public services, gun control, health care reform, regulation of campaign financing, and just about any other priority of any of the Democratic candidates for president.

Nine — so far — have been rated "not qualified" by the American Bar Association. George W. Bush nominated eight "not qualified" justices during his entire eight years in office, and Barack Obama never nominated a single one.

Trump's "Not Qualified" judges include Lawrence VanDyke, whom I featured in a cartoon last month, and Jonathan Kobes, whose confirmation last year to the U.S. Court of Appeals Eighth Circuit required a tie-breaking vote by Vice President Mike Pence.

Trump's unprecedented opportunity for packing the courts comes thanks to the Republican Senate majority under Mitch McConnell. Merrick Garland was not the only Obama judicial nominee McConnell's Republicans refused even to consider. McConnell blocked at least ten others to lower courts.


In 2007 and 2008, a Senate controlled by Democrats helped confirm 68 Bush judicial nominees, including 10 to appeals courts, Tobias said. The last 10 district judges were confirmed Sept. 26, 2008.
By comparison, a Republican-dominated Senate confirmed 20 of Obama’s judicial nominees in the final two years of his term, including two to appeals courts. That’s the fewest since Harry Truman’s presidency, Tobias said....

“The Trump Administration and Senate Republicans have continuously dismantled Senate rules and traditions — including the blue slip process for circuit court nominees — so that they can put highly ideological, corporate jurists on the federal bench,” [Pennsylvania Sen. Bob] Casey said.“It’s a shame that Majority Leader McConnell set the precedent for this breakdown of Senate norms by playing partisan politics and arbitrarily shutting down the judicial nomination process during the final years of the Obama Administration.”

Should any of the Democratic candidates for president overcome the Republican advantage in the electoral college next November, expect this flurry of Republican jurisimprudence to become a blizzard.
Posted by Paul Berge at 7:16 AM