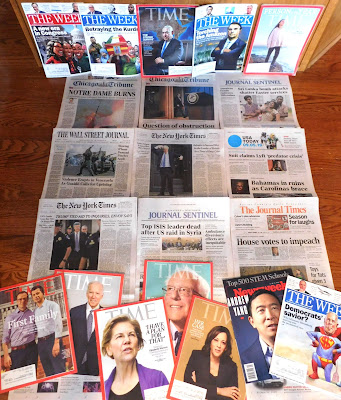 Many newspapers have given up trying to keep up-to-date with the internet and have gone hyper-local these days — which is a good thing, if corporate bean-counters in far-off headquarters have allowed them to keep a staff able to investigate city hall, the state assembly representatives, and area corporations. If, however, the newspaper can't afford to do more than chase ambulances and fire trucks and to serve as a stenographer for the powers that be, its value is greatly diminished.

But what I'm getting at is that my annual photo is forced to overlook world events that don't get banner headlines. The citizen protests in Hong Kong are one example this year; China's repression of its Uighurs is another. My local papers have covered the devastating fires in Australia, but on inside pages. The same with Israel's interminable elections, but at least I have a magazine cover for that.

And as far as those magazine covers are concerned, I apologize to anyone angry that I've overlooked Tom Steyer, Julián Castro, Tulsi Gabbard, Cory Booker, Amy Klobuchar, Marianne Williamson, Deval Patrick, John Delaney, or Michael Bennet. These are the candidates who made the magazine covers in my house.

Speaking of overlooking the obvious, it wasn't my intent, but the cartoons I selected for my year in review include the President of the United States by name only. 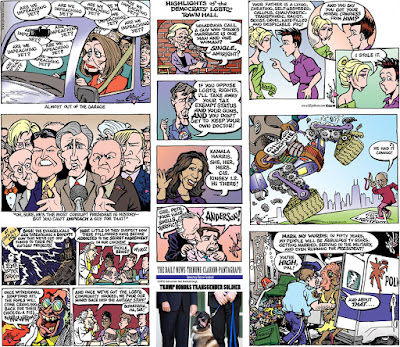 ...except for that photograph of him from gut to knees.
Posted by Paul Berge at 1:04 PM

Email ThisBlogThis!Share to TwitterShare to FacebookShare to Pinterest
Labels: 2019, Year in review