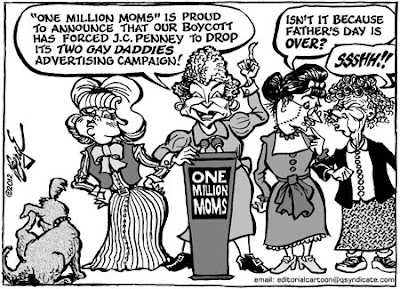 A Christian fundie group called "One Million Moms" (a division of the American Family Association) has had its panties in a bunch over J.C. Penney's ever since the retailer hired Ellen deGeneres as its advertising spokesperson (if they objected to her ads for Maybelline, it never registered on the Richter scale -- perhaps make-up isn't a big deal in the Bible belt).

Then the retailer came out with one advertisement showing a lesbian couple, their children, and one of their mothers. Or maybe the white-haired woman is half of the couple (she looks young to me) and the third adult is her daughter. Or maybe they have an au pair. It really could have been any group of happy, smiling ad models, but OMM was shocked to find -- deep in the catalog --


“On pages ten and eleven, under the title “Freedom of Expression,” you’ll find “Wendi and her partner Maggie and daughters” and again “Wendi, daughters Raven and Clover, and partner Maggie” in text. In the picture both women are wearing wedding bands.”

Then JCP produced another ad tagged "First Pals" featuring two gay fathers playing with their two children in their living room. Where Wendi and Maggie and their family were merely standing together in front of a green background, the ad featuring real-life couple Todd Koch and Cooper Smith and their two kids could not be mistaken by people who didn't read pages ten and eleven for a group of randomly selected models. OMM was none too pleased.


"One Million Moms (OMM) is disturbed that JC Penney's (JCP) is continuing down the same path of promoting sin in their advertisements," a statement read on the One Million Moms website. "In JCP's June catalog, there is another homosexual ad, but this time with two dads celebrating Father's Day."

I can hardly wait for Penney's Fourth of July ad campaign.

And may I just add that it's a really sad day when I find myself linking to TV commercials!
Posted by Paul Berge at 8:14 AM