Q Toon: Yes, We Have No Palmettos 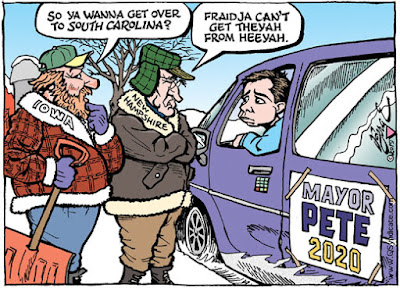 If the polls are to be believed, Pete Buttigieg has soared into the lead among Democratic candidates for president in first in the nation contests in Iowa and New Hampshire.

But even if December polling translates into actual voting in February, the next stop on the campaign trail is in South Carolina, where Mayor Pete is polling just slightly ahead of A Poke In The Eye With A Sharp Stick.

Whereas Iowa and New Hampshire electorates are among the whitest in the nation, South Carolina Democrats rank among the blackest. Not that race has helped black candidates there; even if you added Cory Booker's numbers and those of Kamala Harris before she suspended her candidacy this week, you'd still fall well short of former Vice President Joe Biden's support among South Carolina Democrats. Apparently, being anti-malarkey is a big selling point down there.

I don't hold a lot of stock in polls this far before any actual voting, however, especially where Democrats are concerned. Democratic candidates are like a bunch of cats in a room, and the polls are like a laser pointer shining on one of them. The rest all attack that spot of light until it lands on one of the other kitties.

Remember: at this point in 2003, Howard Dean led the polls; Hillary Clinton had a substantial lead over Barack Obama in December of 2007.

But once the cattle calls debates are over and the caucuses and primaries are underway, my cartoons will have to focus on issues, not who's up and who's down. My deadline for cartoons that will appear after the polls close is well before the polls open. So if I'm gonna comment on the horse race, I have to do it now.
Posted by Paul Berge at 7:30 AM