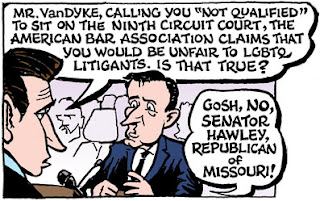 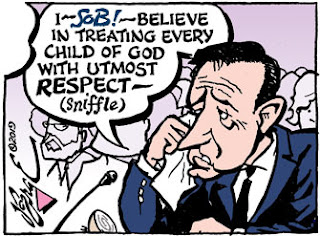 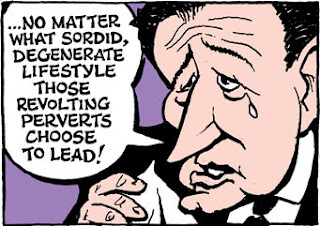 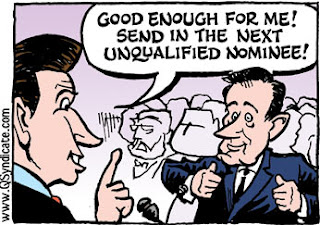 Donald Berzilius Trump likes to castigate the Democrat-controlled House of Representatives as "do-nothing"; but even with investigations and impeachment stuff, the House has in fact sent a lot of popular legislation to the Senate.

There the legislation languishes. The Senate, it seems, is too busy packing the courts with Trump-appointed right-wing ideologues whom the American Bar Association finds "not qualified."

The latest such appointee is Lawrence VanDyke, a former Solicitor General in Montana and Nevada, and Assistant Solicitor General in Texas. In those posts he has challenged against federal gun control laws, wrote a brief in support of anti-abortion legislation in Arizona, and fought federal environmental regulations. Trump has nominated VanDyke to the Ninth U.S. Circuit Court of Appeals, just one level below the Supreme Court.

Colleagues interviewed by the ABA described VanDyke as "arrogant, lazy, an ideologue, and lacking in knowledge of the day-to-day practice" of law. The ABA found that "There was a theme that the nominee lacks humility, has an 'entitlement temperament,' does not have an open mind, and does not always have a commitment to being candid and truthful."

At VanDyke's Senate confirmation hearing October 30, Senator Josh Hawley (R-MO) asked him about the concern that, in the ABA's words, "Mr. VanDyke would not say affirmatively that he would be fair to any litigant before him, notably members of the LGBTQ community."

After fifteen seconds of silence, during which he must have been picturing dead puppies, remembering being picked last for team sports, and playing Randy VanWarmer songs in his head, VanDyke tearfully sobbed, “No, I did not say that. I do not believe that. It is a fundamental belief of mine that all people are created in the image of God. They should all be treated with dignity and respect.”


VanDyke, 46, has been accused of attacking LGBTQ rights as far back as 2004, when in an op-ed for The Harvard Law Record he said that there was “ample reason for concern that same-sex marriage will hurt families, and consequentially children and society.” In 2010, he argued that college student groups had a First Amendment right to exclude LGBTQ students from membership. Two years later, while serving as Montana solicitor general, VanDyke argued against same-sex marriage in two cases, and in a third argued that photographers should be entitled to deny their services at wedding ceremonies of same-sex couples.

VanDyke has also represented and worked as a legal intern for the Alliance Defending Freedom, which is described by the Human Rights Campaign as the “largest anti-LGBTQ legal group in the U.S.” and has been designated a “hate group” by the Southern Poverty Law Center. Vanita Gupta, president of the Leadership Conference on Civil and Human Rights, views VanDyke’s connection to a group that has defended proposed laws to require sterilization of transgender people and criminalize same-sex relationships as evidence of “his acceptance of its radical agenda.”

As McConnell boasted at Trump's campaign rally in Kentucky on Monday, Republicans are “changing the federal courts forever” by rubber-stamping Trump's right-wing judges — 150 of them so far — to lifetime seats. “And Mr. President, we’re going to keep on doing it. My motto is: Leave no vacancy behind.”

And the only threat to these nominations is that some Republicans worry that someone might sneak through who isn't quite doctrinaire enough.
Posted by Paul Berge at 5:30 AM