Q Toon: The Temptation of Graham 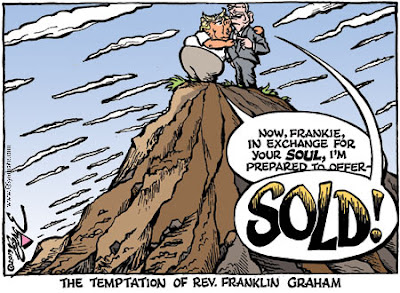 As you probably know by now, Rev. Franklin Graham, son of Rev. Billy, has been busy bad-mouthing Mayor Pete Buttigieg while psalms of praise to Prince of Lies ("Over 10,000 told!") Donald Joffrey Trump.


"Mayor Buttigieg says he’s a gay Christian. As a Christian I believe the Bible which defines homosexuality as sin, something to be repentant of, not something to be flaunted, praised or politicized. The Bible says marriage is between a man & a woman—not two men, not two women."

With Bill Clinton out of the White House and Donald Trump in it, Parson Graham has come to accept the traditional Old Testament model of marriage as being between one husband, one wife at a time, and any number of concubines. Abraham never did the nasty with Hagar in the Oval Office, after all, and probably apologized to Sarah any number of times.

Trump may not know Two Corinthians from Two Chronicles, but Graham says he's a defender of Christianity, and that's good enough for him.

Nor is Graham alone in his adoration of Trump. Virtually every well-known televangelist from Jerry Falwell Jr. to Pat Robertson professes their faith in the avaricious, prideful, gluttonous, cheating, false-witness-bearing, corrupt prophet of Mammon in the White House; and their faithful flock follows suit. He is, after all, a Republican, and not a heathen Democrat like that supposed paragon of moral turpitude, Barack Obama.

Or, of course, Pete Buttigieg, Elizabeth Warren, Joe Biden, Kamala Harris, Andrew Yang, et al. You can bet your bottom dollar that the leaders of the Church of Evangelical Republican Partisanship have already written their screeds against whomever the Democratic nominee turns out to be next year, regardless of how extensive his or her Judeo-Christian résumé is.

One can only hope there are enough truly faithful voters out there able to see beyond the -R after Mr. Trump's name and see the real and present damage he has done to the nation's soul. Consider this account of a Bible study from writer Paul Prather:


[I]f Christians today, using the Bible as their model, believe God ordained Donald Trump to be our president, then they must by definition agree God also appointed Barack Obama as president for the previous eight years.
And before him, George W. Bush. And before him, Bill Clinton. And so on, right back to George Washington.
To disrespect any leader — including incompetent James Buchanan or racist Andrew Johnson or crooked Richard Nixon or modern conservatives’ banes, Clinton and Obama — is to stick your finger in the Lord’s eye.
Some months ago, we discussed Paul’s views about submitting to the governing authorities in my congregation’s midweek Bible study.
“Wait,” one friend said uneasily. “If he’s right, then our founding fathers sinned when they revolted against King George III. That can’t be, can it?”

As the Bible says, "The reign falls on the just and the just awful alike."


Read more here: https://www.kentucky.com/living/religion/paul-prather/article226453595.html#storylink=cpAsAy
Posted by Paul Berge at 7:21 AM