Last week, Seaplaneback Saturday celebrated the centennial of the first successful manned transoceanic flight, completed by U.S. Navy Lt. Commander Albert C. Read in fits and starts over the course of three weeks in May, 1919.
As I indicated at the close of the post, however, Lt. Commander Read's accomplishment was soon overshadowed by the British team of Captain John Alcock and Lt. Col. Arthur Whitten Brown, who completed the journey in one hop. 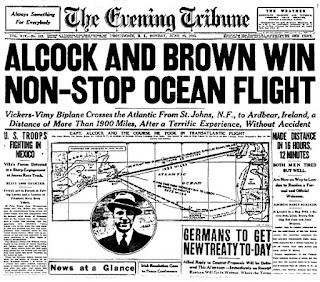 But their trip was no less harrowing. Alcock and Brown took off in their modified Vickers-Vimy biplane from Lester's Field near St. John's, Newfoundland, on the afternoon of Saturday, June 14 (they had wanted to start on Friday the thirteenth, but were delayed trying to find a smoother runway than the uneven one at Lester's) in cloudy conditions. They barely cleared the trees at the end of the runway, but once over the Atlantic they climbed to 1,300 feet.
About three hours into the trip, they encountered fog and descended to only 300 feet. After an hour without being able to see where they were going, Alcock and Brown tried to ascend above the fog bank while the sun might still show what direction they were headed, but they found only a higher bank of clouds.
From Alcock's account shortly after landing:


"We had a terrible journey. The wonder is we are here at all. We scarcely saw the sun or moon or stars. For hours we saw none of them. ... For four hours, our machine was covered in a sheet of ice caused by frozen sleet. At another time, the fog was so dense that my speed indicator did no work and for a few minutes it was very alarming.
"We looped the loop, I do believe, and did a very steep spiral. We did some very comic stunts, for I have had no sense of horizon."

Unlike Albert Read's team, Alcock and Brown did not have a fleet of ships shining lights to point their way. With their navigational guides malfunctioning and their radio dead three hours into the flight, they had no way of knowing how far off course they might be. The batteries in their heated leather flight jackets ran out of juice, but they were at risk of burning as well as freezing. Not included in the initial newspaper reports was that at one point, an exhaust pipe from their starboard engine split and began spewing flames into the slip-stream and spitting white-hot globules of molten metal at the controls.
Around 3:00 a.m., they ran into more rain, hail and snow, and their airspeed indicator jammed; they went into that deep spiral dive at this point. Press reports quoted Alcock as saying, "I did not know once whether we were upside-down or not. Once, we ascended hurriedly when we saw the green Atlantic only 30 feet below." The Associated Press claimed that the plane came as low as ten feet above the ocean; Alcock said they could taste the sea foam. With ice forming on the wings and snow filling their cockpit, Brown had to venture out onto the wings to chip away at ice clogging the carburetor air intake — four times.

On the positive side, they had the wind at their back the whole journey; it would be nine more years before anyone succeeded in flying across the Atlantic from east to west.
At last, they made it through the storm and day broke. The pilots took their plane to a lower altitude so that the snow and ice could melt, even though that took them back into the clouds. Finally, some sixteen hours after take-off, they spotted land ahead and were able to determine that they had reached Clifden, Ireland, about 75 miles shy of their intended destination, Galway. The green space they chose for a landing site turned out to be a bog, however, and their plane plowed into the muck. But responders from a nearby radio tower were able to pull them out unhurt.
The two were feted as heroes, received the Daily Mail's ￡10,000 ($50,000) prize from Secretary of State for Air Winston Churchill, and were knighted by King George. Alcock would perish in an airplane crash six months later; Brown served for a time during World War II in the Royal Air Force, but retired due to ill health.
So anyway, as you can see, the new possibilities of transatlantic flight gave editorial cartoonists a host of new gags to draw — occasionally affording them new ideas for commenting on the looming deadline for Prohibition (above) or the 2020 presidential race (below).
In conclusion, since I really ought to include at least one British cartoon in this post: