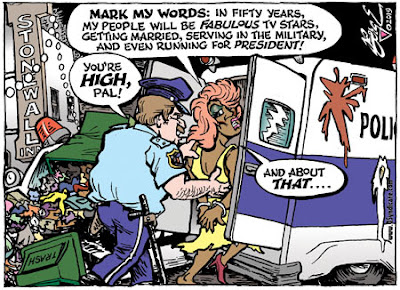 This June marks the 50-year anniversary of the Stonewall Riots, generally regarded as one of the key turning points in the gay liberation movement (as it was called before we became an unpronounceable acronym).

For anyone needing to catch up, New York police raided the Stonewall Inn, a gay bar in Greenwich Village, at 1:20 a.m. on June 28, 1969. Typically, these raids netted a dozen or so humiliated gays, lesbians, transsexuals or transvestites ("transgender" not yet being in common parlance) hoping against hope to keep their names and photos out of the newspaper.

But whether it was the weather, or the death of Judy Garland, or Canada having just decriminalized homosexuality, or Freddy Mercury in retrograde, the customers of the Stonewall decided not to go quietly. They refused to cooperate with the police, who then announced that they would arrest everyone in the bar. A crowd gathered as the police waited for additional paddy wagons to arrive; police escalated their use of force, and the riot began. And lasted through the weekend, flaring up anew on Wednesday in response to insulting reportage in The Village Voice.

Today's cartoon would have taken place in a relatively quiet moment.

So, then, how far have we come in the half century thence?

LGBTQ actors are much freer to be out and open about their sexuality than their counterparts fifty years ago; and films about us do not consistently portray us as doomed social misfits who die unloved and unmourned by the final reel.

Marriage equality was hardly on anybody's radar in 1969. Keeping one's job and staying out of jail were more pressing issues. The burden is now on the religious right as they fight to restore for themselves the privilege of being able to discriminate against us in employment, housing, and health and public services.

With the war in Vietnam becoming increasingly unpopular, military service wasn't a hot issue for the gay liberation movement, either. But there were nevertheless those at the time whose career calling was in the military; and in spite of failed half-measures such as "Don't Ask, Don't Tell," sexual orientation is no longer an automatic bar to military service and advancement. Whether the Corrupt Trump Administration's current regressive policies prove to be a temporary setback or not remains to be seen.

I'd still rate Pete Buttigieg as a long shot to be inaugurated president on January 20, 2020, but taking his candidacy seriously at all would have been inconceivable in 1969. Still, our prescient perp overlooks the fact that other countries have or have had openly LGBTQ heads of state in the 21st Century. And none of them have been consumed by fire or brimstone.

The tendency toward finding community in urban centers has concentrated our political power there and in the one political party left with concern for urban issues. It has, unfortunately, contributed to the acreage advantage the other political party has to diminish our influence on a state and national scale by the gerrymander, and to disregard the Log Cabineers, GOProudsters, and Caitlyn Jenners along its fringe.

Flexing its legislative, financial and current executive muscle, that political party has spent the past fifty years stacking the courts with reactionary activists, so this is no time to trust that progress made will be progress kept.
Posted by Paul Berge at 11:50 AM