Q Toon: The Beauty of the System 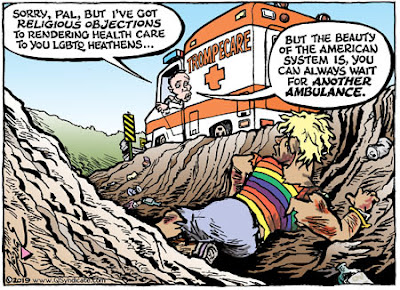 Last week, the Corrupt Trump Administration issued a new rule granting health care workers the right to do no weal if they can claim that patient care would impinge on their religious sensibilities.

Lambda Legal warns that, “The proposed rule also shields health care providers even if they refuse to give a referral after denying care, regardless of the consequences to the patient, and in violation of medical and ethical requirements and standards of care.”

The move is part of the right-wing Republican obsession to deny women control of their own bodies and to promote discrimination against LGBTQ people — transgender persons in particular. Except, of course, that it's not about us; it's about the poor, persecuted Christian majority.


Roger Severino, the director of HHS’ Office for Civil Rights, defended the new rule, saying it “does not create new substantive rights,” rather it “gives life and enforcement tools to existing federal conscience protections that have been on the books for decades.”
“We have not seen the hypotheticals that some have used to criticize the rule actually develop in real life,” he told NBC News in an email. “The beauty of the American system is that there are options for everyone. This rule promotes that principle by ensuring greater diversity in health care so that patients can continue to find doctors who match their values, and for example, OBGYNs are not excluded from the practice of medicine simply because they stand on the side of defending unborn human life.”

The rule protects not only doctors and nurses, but also pharmacists, insurance providers, and, yes, EMTs. Even if your doctor has no religious objection to prescribing your hormonal or immunotheraputic drugs, you may have to travel across the state to find a pharmacist willing to fill out your prescription.

And it's not as if insurance companies have any shortage of excuses for denying coverage already.

Pray that your premiums haven't been going to fund a company bought out by a cult of antivaxxer voodoo Scientologists.
Posted by Paul Berge at 7:41 AM