Q Toon: For Better And Formosa 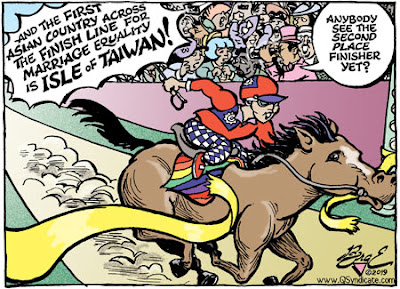 Acceding to a two-year deadline set by their courts, Taiwan's parliament voted to legalize same-sex marriage last week by a vote of 66 to 27. The bill won out over two rival bills that would have granted only partial partnership rights; and while co-adoption rights and international couples were excluded from the approved legislation, it's far and away more progressive than anything anywhere else in Asia.

Homosexuality is still a capital offense in Saudi Arabia, Iran, Afghanistan, Brunei, Pakistan, Qatar and Yemen, and is against the law in Egypt, Syria, Lebanon, United Arab Emirates, Oman, Pakistan and Bangladesh. If homosexuality in Russia is legal de jure, gay-bashing, lynching and murder are apparently legal de facto. Extermination of homosexuals continues in Chechnya. Homosexuality is also illegal in Maldives, Bhutan, Malaysia, Myanmar, and some provinces of Indonesia. Male homosexuality is illegal but female homosexuality is not in Uzbekistan, Turkmenistan and Singapore.

The only countries in Islam where homosexuality is legal are Iraq, Jordan, Turkey and Bahrain. The Supreme Court of India decriminalized consensual homosexual acts only last year.

If there is a second-place horse on the horizon, it is likely to be Thailand, where the legislature is considering a marriage equality bill, or Japan, where the matter is in the courts. Israel is unlikely to move in that direction as long as the Netanyahu government depends upon hardline right-wing religious parties to keep its coalition in power.

Taiwan's legislature acted one week before a court-imposed deadline set two years ago; President Tsai Ing-wen supports marriage equality and her signature on the bill is likely. Had the government failed to enact marriage equality, a 2017 court ruling would have made it the law of the island anyway.

Hong Kong granted same-sex spousal visas for international couples last year, which isn't quite the same thing as marriage equality. The mainland Chinese government controls Hong Kong and claims sovereignty over Taiwan; the communist party organ People's Daily tweeted that marriage equality had been approved by "local officials." Aside from that slight, its overall coverage of the move seems to have been surprisingly favorable.
Posted by Paul Berge at 8:21 AM