Silence of the Sams

I had planned to save these cartoons for this summer, but after Secretary of Housing and Urban Development Ben Carson's stunning performance in front of Congress this week, now seems to be a good time for Scamback Saturday to remember one of his predecessors at the department.

Samuel Pierce was Secretary of HUD from 1981 to 1989.  Pierce had the distinction of being the only African-American in Ronald Reagan's cabinet, and the only cabinet official to serve in the same post for all eight years of Reagan's presidency.

Several HUD Secretaries have been former mayors or otherwise professionally involved in urban renewal. But like Ben Carson, Pierce had no such experience before Reagan named him to the job. Also like Ben Carson, Pierce was African-American, the Republican euphemism for which is "urban," an area the increasingly exurban and rural Republican Party could hardly care less about. If a Republican president has to have one Black person in the cabinet just for appearances sake, he might as well be Secretary of Housing and Urban Development, even if his field of expertise is brain surgery and he's totally unfamiliar with real estate jargon.

Unlike Carson, however, Sam Pierce at least had ample subcabinet-level experience, starting out in Eisenhower's Department of Labor and later as general counsel to Nixon's Treasury Department. But the tenure of "Silent Sam" at HUD was so low-key that when he and the president who appointed him attended a U.S. Conference of Mayors luncheon, Reagan thought Pierce was one of the mayors.

Chuck Stone, a black editor at the Philadelphia Daily News and longtime acquaintance of Pierce, says the Secretary “has the three B’s Republicans like—brilliance, blackness and blandness. Republicans don’t like audacious blacks.”

It was only after Pierce was gone that an investigation by the U.S. Office of the Independent Counsel uncovered mismanagement and political favoritism in HUD dating from his first days on the job.


Despite a pledge during his Senate confirmation hearings to ''sever'' his ties to his former New York law firm, Samuel R. Pierce Jr. regularly did personal favors for his former colleagues and interceded with subordinates in the Department of Housing and Urban Development on their behalf, documents from his office files show.
While there is no indication that the former Secretary broke any law barring conflicts of interest or directed subordinates to act improperly, Representative Tom Lantos, Democrat of California, said the documents raised ''additional questions about Secretary Pierce's management at H.U.D.''  ...
Ethics lawyers at H.U.D. said Mr. Pierce's agreement to sever ties with the firm did not bar him from all dealings with it. And lawyers at the Office of Government Ethics said that to prove a criminal violation against an official like Mr. Pierce, a prosecutor would have to demonstrate that he personally and substantially took part in a matter affecting his former firm.

Investigators also uncovered several cases in which outside agents managing the foreclosure of properties on behalf of HUD, instead of subtracting their management fees and turning the rest of the proceeds over to HUD, were pocketing the entire proceeds and never filing the paperwork. Contracts went to politically connected landlords and developers, funneling money to the campaigns of a number of politicians.
As the scandals came to light, Pierce claimed that HUD was too big for him to follow individual programs, and he threw his chief aide, Deborah Gore Dean under the bus. She and others on Pierce's staff would be convicted on various felony charges, but Pierce himself was never charged with any criminal activity.
Now, I have to caution that there was never any connection between the shenanigans at HUD and the Iran-Contra scandal.

But one familiar name from the Corrupt Trump Administration pops up in those 30-year-old reports. 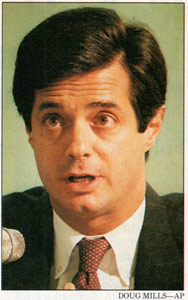 As one particular scam involving conversion of some abandoned World War II era internment facilities for Japanese-Americans into apartment dwellings was reported in Newsweek in 1989:


The moving force in the project was Paul Manafort, a Reagan campaign consultant in 1980 who later diversified into lobbying and power brokering. When a friend told him the ancient housing project was for sale, Manafort sounded out Deborah Gore Dean, Pierce's chief aide, and got informal encouragement that he could get a rehabilitation contract. Through another crony, he persuaded New Jersey officials to apply for a grant; with two associates, he formed CFM Development Corp. and bought the project for $4.4 million. HUD promptly approved the project, providing $5 million in construction funds and guaranteeing rent subsidies totaling $31.1 million over 15 years. CFM hired Manafort's firm, Black, Manafort, Stone & Kelly [okay, more than one familiar name there!] to keep the wheels greased at HUD, paying it a consultant's fee of $326,000. The rent subsidies guaranteed an operating profit, but the program offered a second bonanza in the form of $11 million worth of tax credits. ...
Mayor Bruce Peterson of Upper Deerfield Township, N.J., called the project "a horrible waste of the taxpayers' money." It was imposed on the community as a fait accompli, he testified; the housing wasn't needed, the buildings were too old and shabby, the work being done was shoddy and the subsidized rents were way above local standards.

✍
These four cartoons about Samuel Pierce are the most I've ever drawn about any Secretary of HUD. The only other HUD Secretary I've ever cartooned was Jack Kemp, who comes in second place, and only because he's in that second cartoon about Pierce. Which never got published until now, so it shouldn't even count.
On the other hand, Kemp did appear in at least one of my cartoons when he was Republican Vice Presidential nominee in 1996. For that matter, I've drawn Carson in at least three cartoons, but as a 2016 presidential candidate.

Since the ratio of verbiage to cartoons in this post is weighted too heavily to the former, here's one of those Carson cartoons. 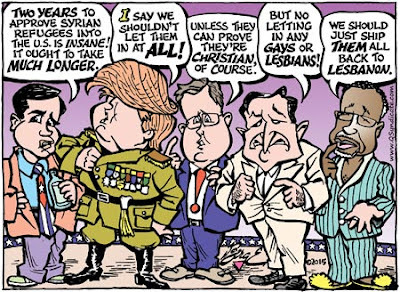