Flights of Fancy and Fleeting Fame

Okay, so the Great War is over, and all those guys your army and navy trained to be airplane pilots are returning home. Sopwithback Saturday hearkens once again to 1919 and the question of how are you gonna keep 'em down on the farm after they've looked at clouds from both sides now?

Back in 1913, the London Daily Mail offered a reward of £10,000 to the first person or team to complete a transatlantic flight from the U.S. or Canada to the British Isles. The contest was suspended for the duration of the Great War; but with the cessation of hostilities, American and British aviators resumed the contest, capturing the imagination and enthusiasm of cartoonists on both sides of the pond.
Transatlantic travel being relatively routine these days, it's worth pointing out the challenges faced by those aviation pioneers in their rickety flying machines and their open-air cockpits. Consider this description from Cartoons Magazine of


"...the hazards of travel in a machine that for weeks must wait at its hangar for fair weather, and then when it sets out travel so fast that it overtakes the last spell of bad weather on its way eastward. ... [I]t is not to be wondered at that the less daring souls, who make out their wills before attempting a passage by forty-thousand ton steamers should not book a passage by Sopwith until the pilot can carry on his machine an automatic storm control."

John Cassel's cartoon accurately describes the preferred route for transatlantic flights in the northern hemisphere, but it's not the route chosen by the first American team to mount a successful attempt. A team led by U.S. Navy fliers Commander John H. Towers, Commander Patrick Bellinger, and Lt. Commander Albert C. Read, Sr., chose a route hopscotching from New York to Newfoundland, and thence across the Atlantic with a stop in the Azores. 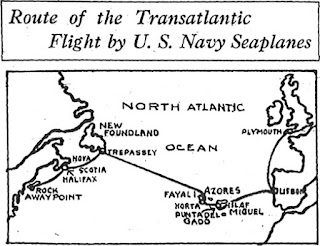 The team took off from Long Island on May 8, 1919 in three NC Curtiss "flying boats." At Trepassey, they were met by the U.S.S. Aroostook, sent there ahead of time to refuel and relubricate the three planes for the longest leg of the journey.
The 15-hour flight from Newfoundland to the Azores would require flying overnight, so 22 navy ships were stationed along the route, shining searchlights into the sky to mark the flight path. Two of the planes, the NC-1 and NC-3, were forced to ditch at sea when the planes encountered a fog bank. Happily, all aboard were rescued, and while the NC-1 unfortunately sank, the NC-3 eventually rode the waves to port.
That left only Read's NC-4 to complete the journey (the NC-2 having been cannibalized for parts at the outset of the trip). After losing over a week due to mechanical problems, the NC-4 took off for Lisbon on May 27.
Read's plane made the flight from São Miguel Island to Lisbon in under ten hours, thus becoming the first plane to complete a transoceanic flight. Great fanfare greeted Read when his plane finally landed in Plymouth, England on May 31.
But he didn't win the £10,000 prize.

Terms of the Daily Mail contest stipulated that the award would be given to "the aviator who shall first cross the Atlantic in an aeroplane in flight from any point in the United States, Canada, or Newfoundland to any point in Great Britain or Ireland, in 72 consecutive hours." Read's total actual flight time from Trespassey to Plymouth was 26 hours, 46 minutes, but spread out over eleven days.

Instead, the prize was won by the British team of Capt. John Alcock and Lt. Col. Arthur Whitten Brown, who completed a non-stop flight from Newfoundland to Ireland in a Vickers Vimy biplane in 16 hours, 27 minutes on June 15-16.
But I suppose that's a whole 'nother story.
Posted by Paul Berge at 6:28 AM