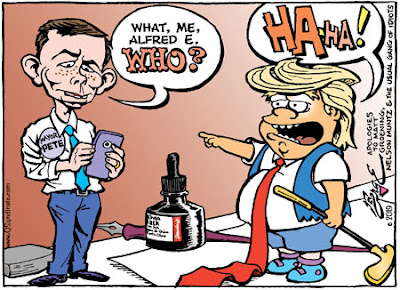 In case you were somehow distracted by the Corrupt Trump Administration's trade war with China, its teetering on the verge of actual war with Iran, its determination to provoke a constitutional crisis with Congress, or Republican legislatures decreeing women's uteruses to be government property, here's what you missed. When asked for his opinion of Buttigieg, Trump told Politico that "Alfred E. Neuman cannot become president of the United States," and Mayor Pete responded


"I’ll be honest. I had to Google that. I guess it’s just a generational thing. I didn’t get the reference. It's kind of funny, I guess. But he’s also the president of the United States and I’m surprised he’s not spending more time trying to salvage this China deal."

I don't understand how anyone can make through high school without learning who Alfred E. Neuman is, but, as Stephen Colbert explained to The Kids These Days, "If you're too young to know the reference, magazines were these thick stacks of paper with pictures and words on 'em."

Personally, I found it easier to draw a convincing Muntz-Trump hybrid than a Neuman-Buttigieg one.
Posted by Paul Berge at 4:00 AM