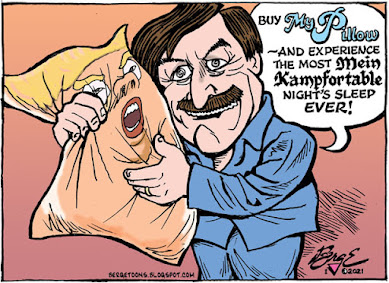 In his final hours as President, Donald Joffrey Trump has been quickly running out of allies. Cabinet members and even Yertle McConnell have turned their backs on him, now that they've gotten out of his corrupt administration everything they possibly can.

The only friends Trump has left are the ones who want a pardon out of him. And My Pillow Guy Mike Lindell, who stopped by the White House on Monday to offer his ideas on how to impose martial law on the U.S., just like all those leaders of shithole countries Trump used to look down upon.

Makes me wonder what Lindell needs a pardon for.