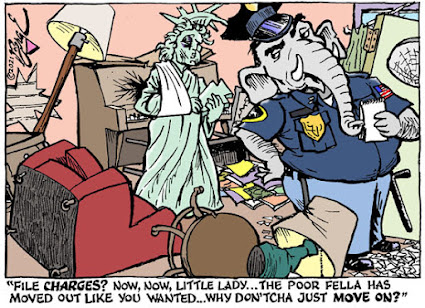 Less than a month after hordes of Trumpanzees stormed the U.S. Capitol, egged on by a defeated President who simply couldn't wrap his mind around the idea that losing an election means you have to leave office, the Republican Party came out firmly in favor of forgetting all about it.

The Arizona GOP has officially censured fellow Republicans Arizona Gov. Doug Ducey, former Sen. Jeff Flake, and Cindy McCain (widow of the party's 2008 presidential nominee) for having the temerity to suggest that Joe Biden won the 2020 election. Oregon's GOP issued a letter claiming that the assault on the Capitol was somehow a "false flag" operation perpetrated by liberals. And all but five U.S. Senate Republicans voted to declare the House's January 13, 2021 vote to impeach Trump unconstitutional, because a week later, Trump wasn't president any more.

Since it is settled law that you can't charge a president with a crime and haul him into court, that leaves only impeachment. Republicans were quick to impeach back when they cornered a Democrat into lying about a blow job; their position back then was that censure simply wouldn't do.

For weeks, Democrats in the minority had pushed for a floor vote — censuring Bill Clinton for his behavior and substituting a censure resolution for impeachment articles by sending the latter back to the House Judiciary Committee. The parliamentary tactic was rejected as non-germane; an appeal vote failed and House Democrats briefly exited the chamber in protest.

So we have the problem today of whether and how to hold a president accountable for his actions when he or she is supposed to be handing the office over to someone else.

I have not found any evidence that our Founding Fathers ever considered the possibility of a future President of the United States refusing to accept the results of an election that he lost. Somehow, the very idea was inconceivable; John Adams and his son were none too happy to turn the presidency over to Thomas Jefferson and Andrew Jackson, respectively, but they did it without filing spurious lawsuits, firing half the Justice Department, or entertaining pillow salesmen's proposals for martial law.

Woodrow Wilson, whatever his faults, recognized that if he lost his 1916 reelection bid (which appeared to be the case when he and the morning papers went to bed Election Night), that the four months before Charles Evans Hughes would be sworn in to succeed him could leave the U.S. without solid leadership with World War I raging overseas. Wilson reportedly planned to appoint Hughes Secretary of State, then resign along with Vice President Marshall so that Hughes could take over sooner.

Donald Trump's disgraceful behavior may be an outlier now, but there is no guarantee that it won't become standard procedure in the future.

In fact, there is every indication that, at least as far a the ReTrumplican Party is concerned, that is exactly what will happen.