Q Toon: Praise the Lord and Pass the Regulation 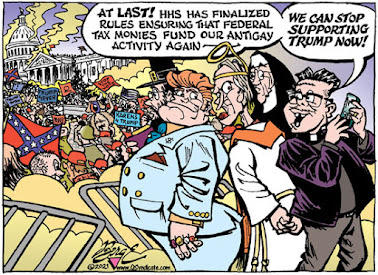 If nothing else, the Corrupt Trump Administration, for all its craziness and criminality, delivered for the right-wing "religious liberty" crowd. They carried him into power and has been unshakable in its loyalty to him throughout these four ghastly years, no matter how many pussies he boasted of grabbing, how many blatant lies he told, or how many of the seven deadly sins he could squeeze into a single tweet.

On Thursday, the day after Trump's Qult followers assaulted the Capitol, the Department of Health and Human Services finalized rules giving faith-based organizations the green light to discriminate against LGBTQ citizens at will.

Most prominently, the new regulation would allow taxpayer-funded child welfare services to refuse placement into LGBTQ families or discriminate against LGBTQ youth. Religiously affiliated adoption and foster care centers have been pushing for this change in regulation, including Catholic Social Services in Philadelphia, which currently has a case pending before the U.S. Supreme Court seeking a First Amendment right to reject same-sex couples on religious grounds.

This hardly comes as a surprise; Trump appointees who came into office at HHS arrived with a solid record of pushing back against LGBTQ rights. To head HHS's Office of Civil Rights, Trump brought in anti-LGBTQ activist Roger Severino, who has shown up in this here blog a handful of times.

Thursday's regulations had to be tweaked after first being published last June in order to satisfy the Supreme Court ruling in a couple of civil rights cases. The later addition of a fourth Justice likely to join Alito, Kavanaugh, and Thomas in dissent may not yet be enough to overturn last summer's ruling.

There, too, the religious right got what it wanted out of their thrice married failed casino owner who couldn't find Two Corinthians with a concordance.

By the way, I kind of expected some blowback over including a nun in this cartoon. But that was before I saw photos of Sisters of Our Lady of the Blessed Stable Genius indeed among the Qult of Trump at his rally. 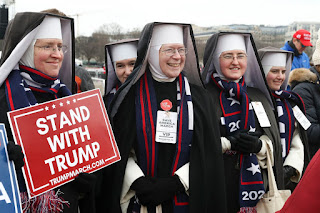