Q Toon: Welcome to the Job 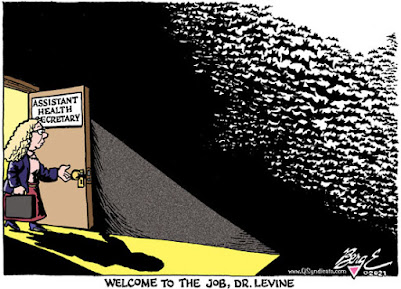 Pediatrician Dr. Levine has been Pennsylvania's Secretary of Health since 2017, and before that the state's Physician General. In those posts, she has overseen Pennsylvania's response to COVID-19 and the opioid epidemics, and established the state's medical marijuana program. If confirmed as the nation's Assistant Health Secretary, she would be, among other things, the Surgeon General's boss.

A Republican state legislator from western Pennsylvania, Jeff Pyle, responded to Dr. Levine's appointment by posting a derogatory image about her on his Facebook page, sparking immediate backlash. "I had no idea" that the post would be "received as poorly as it was," he mewled after deleting his post.

Breitbart News persistently misgendered and deadnamed Dr. Levine throughout its reporting on her nomination. Over at Fox Noise, Tucker Carlson attacked her appointment and

falsely referred to Levine’s gender as her “sexual orientation or sex life,” saying, “This is like the perfect encapsulation of everything I despise about neoliberalism. You're supposed to be thrilled by this person's sexual orientation or sex life or whatever, her personal life.” He concluded with a rant that Levine’s nomination was “an effort to see how big a middle finger can we wag in the face of the country..."

But at least he got her gender right. You take your progress wherever you can find it these days.