Is there an LGBTQ angle to last Wednesday's cluster putsch at the Capitol? 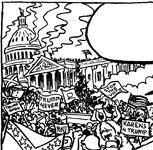 Someone in the mob was waving a rainbow flag that repeatedly showed up in television coverage. It must have been some GOProud Boy, I suppose; there's no point in denying long thread from Ernst Röhm to Milo Giannopolis.

But there's no rainbow flag in this week's cartoon, of which this today's sneak peek is only a corner. Do you have any idea how difficult it is to draw a rainbow flag this small?

Email ThisBlogThis!Share to TwitterShare to FacebookShare to Pinterest
Labels: capitol