As a tribute to Alex Trebek, Winton Smithback Saturday takes a break from cartoons of a century ago and looks instead to a few of my own from 35 years ago. Although Trebek's iteration of Jeopardy! would not begin until October of 1984, these cartoons date from the first three months of the year. And none are in the form of a question.

So, as a tribute to Alex Trebek, this is kind of lame. But indulge me anyway. 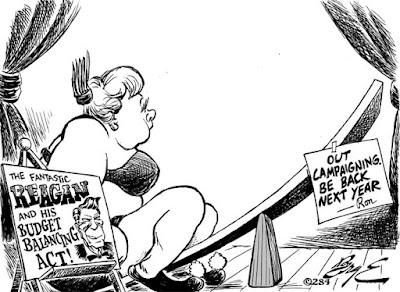 In 1980, Ronald Reagan had campaigned heavily against the federal deficit under the Carter administration: the figure that year was $74 billion. By 1984, it had ballooned to $185 billion.

This balancing act cartoon was the final installment of a short-lived running gag I had going. Reagan never returned to the budget balancing act, either in Washington or in my cartoons.

Since then, the Bill Clinton administration managed to pass a handful of balanced budgets, but this year's deficit is estimated to amount to $984 billion. 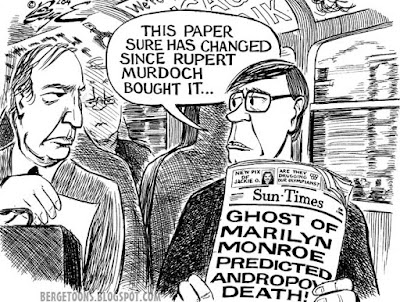 Australian media baron Rupert Murdoch bought the Chicago Sun-Times from Field Enterprises in 1984. Up to then, the morning tabloid had a liberal reputation, being home to editorial cartoonists Jacob Burck (who died in 1982) and Bill Mauldin, and columnists Roger Simon, Roger Ebert, and Mike Royko. Under the new owner, the Sun Times editorial voice shifted to the right.

His politics notwithstanding, Murdoch was better known at this point for the sensationalism of his Sydney Daily Telegraph, News of the World, the Sun of London, the New York Post and the supermarket tabloid Star.

Murdoch's ownership of the Sun-Times would be brief. He sold the paper in 1986 for $145 million in order to buy Chicago's unaffiliated television station WFLD channel 32 (also from Field Enterprises), and use it to launch his Fox TV network. 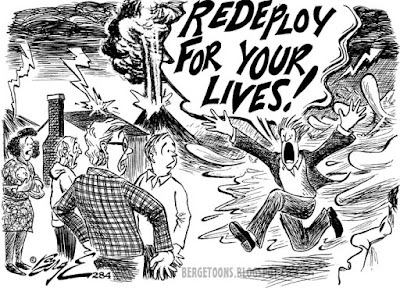 Not quite four months after the bombing of the U.S. Marines' barracks in Beirut in which 299 U.S. and French soldiers were killed, President Reagan announced on February 7 that he was pulling our troops out of the Multinational Force in Lebanon. It was not to be called a "retreat," however; officially, our troops were merely being "redeployed." France, Great Britain, and Italy would redeploy their troops by the end of February. 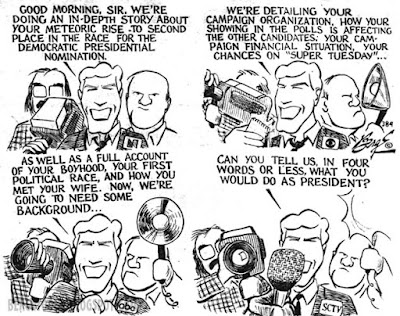 There were some eight serious candidates for the Democratic presidential nomination in 1984, three of whom withdrew immediately after the February 28 New Hampshire primary. (I'm not counting the perennial candidate, wacko fascist Lyndon LaRouche, who died just last month.) Colorado Senator Gary Hart came in second in the Iowa caucuses and first in New Hampshire, establishing himself as the media's Flavor of the Month.

Besides editorial cartoons, I was also drawing comic strips for the student newspaper at the University of Wisconsin at Parkside. But I've already posted "The Funny Paper Caper" series in this blog (starting here), so I'm not going to repeat it today.

I close instead with my commentary on the evergreen controversy over allowing prayer in public schools. The new wrinkle in right-wing evangelicals' push at the time was their proposal to carve out time in the school day for a "voluntary moment of silent prayer." 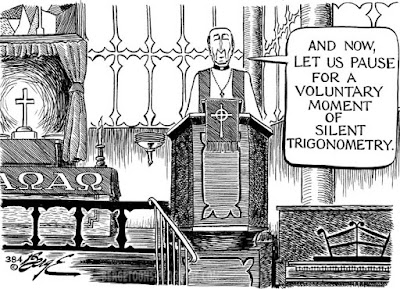