I usually like to have these Saturday posts planned out well enough in advance to have done the necessary research; but due to family matters, I've fallen a little behind schedule. Never fear, however. Serialback Saturday herewith begins the first of a series of my juvenalia.

Way back when I was drawing editorial cartoons for the UW-Parkside Ranger, I tried my hand at a continuity strip. It started with a murder almost foul.
The victim in this murder mystery was a not-particularly-well disguised character from a comic strip then running in the Racine newspaper, Brutus P. Thornapple. Brutus is the central character in The Born Loser, created by Art Sansom, and continued today by his son Chip. By the second episode, I began widening the story's reference material. 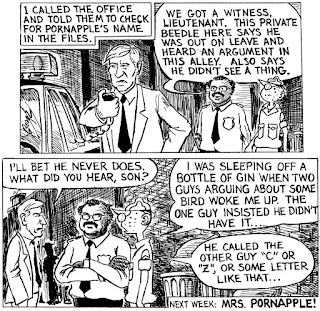 "The Funny Paper Caper" appeared every week in the UW-Parkside Ranger, a single strip until midway through the academic year I realized that I had paced the thing too slowly. Having such short episodes helped to get people to read the thing at first, and with any luck, get hooked on the story. Longer form cartoons would have run the risk of discouraging students with busy schedules from taking the time to engage from the beginning. 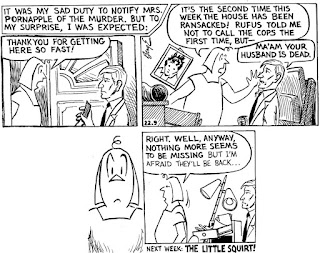 If I were drawing this same strip today, I'd probably try to mimic the comic noir style of the black-and-white Dick Tracy of the 1970's and '80's. The funnies of the time didn't use a lot of cross-hatching, save for those in which the syndicate would apply dot or hatching screens to areas indicated by the cartoonist. The serial strips, in the interest of appearing more realistic, relied less on that flat technique, although such as Captain Easy and Buz Sawyer were able to use mechanical shading while still maintaining the illusion of three dimensions. Color, of course, was for Sundays only.

Well, there you have the episodes for the entire month of September. Tune in to some future installment as the plot, and the plagiarism, thickens.
Posted by Paul Berge at 7:00 AM