Q Toon: I Hear You Knocking 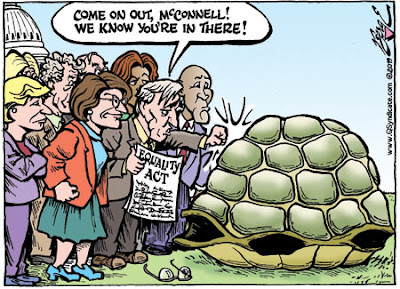 Democrats in the House and Senate have introduced the Equality Act to extend existing federal anti-discrimination protections in employment, housing, credit, jury selection, and education to include persons on the basis of gender identity and sexual orientation. The measure seems certain to pass in the Democrat-controlled House of Representatives.

Chief Senate sponsor Jeff Merkley (D-OR) has a tougher row to hoe. Among Republicans, only Maine's Susan Collins has signed on to the bill; and one of the Democrats' own, Sen. Joe Manchin of West Virginia, has announced that he will vote against the bill. His problem with the bill seems to come from its inclusion of transgender students among those whose rights it would protect.

Manchin had not made his decision known as I was drawing this cartoon Sunday night. Had I chosen to make him the focus of the cartoon, I suppose I would have drawn the other Democrats calling down a coal mine shaft.

As far as Yertle McConnell is concerned, however, when he eventually comes out of his shell, we'll find out whether it is to attach some poison pill amendment (say, protecting the rights of Clockwork Orange "reparation therapists") or to kill the Equality Act outright.
Posted by Paul Berge at 6:56 AM