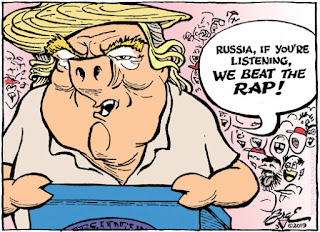 So Attorney General William Barr issued his book report on the Mueller report, saying, essentially, "Move along, folks. Nothing to see here."

If the Republicans have their way, we may never see Bob Mueller's actual report; but Barr's summary finds it necessary, in the four paragraphs about Russian interference in the 2016 U.S. Presidential election, to iterate and reiterate four times that "the Special Counsel's investigation did not find that the Trump campaign or anyone associated with it conspired or coordinated with Russia."

Yet for all the crowing by the Corrupt Trump Administration that Mueller's report "totally vindicates" the president (except for that sentence in which Barr's summary expressly says it does not), his investigation has yielded a remarkable number of indictments and guilty verdicts for Trump cronies.

As for the central issue of Trump campaign collusion with Russia, who can forget Don Jr.'s "if it's what you say I love it, especially later in the summer" meeting at Trump Tower to discuss Russian intel on Hillary Clinton? And of course, there was Don Sr. a month later publicly egging the Russians on to publish Mrs. Clinton's emails. And his telling Jr. to lie that the meeting was about adoption policies.

But move along, folks.