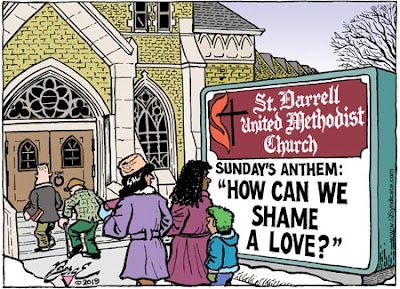 Representatives of the worldwide United Methodist Church met in St. Louis, Missouri, February 23-26, and fought over competing resolutions to describe their church's attitude toward LGBTQ clergy and parishioners.

The conservative "Traditional Plan," which strengthened the church's prohibitions on "self-avowed practicing homosexuals" from ordination and mandated a year-long defrocking of any clergy who perform marriage ceremonies for same-sex couples or ordain LGBTQ clergy, passed in a 438-384 vote.

Delegates to the General Conference had earlier rejected a pro-LGBTQ "One Church Plan," which would have left those matters up to the conscience of individual clergy and congregations, by a vote of 374 to 449. A "Simple Plan" submitted by the Queer Clergy Caucus fared just as poorly.

Although many (but by no means all) Methodists in the United States now have liberal attitudes toward LGBTQ clergy and marriage equality, the majority of Methodists in the Third World do not. And it is that second group who are growing. 41% of the delegates were from outside the U.S., 30% from Africa alone.


"The old ladies in the villages, the old men in the villages, the young boys in the towns and villages, are all celebrating that the United Methodist Church has maintained its traditional view of the Bible," says Dr. Jerry Kulah of Liberia, general coordinator of the church's Africa Initiative. "Other denominations all across Africa are celebrating the United Methodist Church. That is the kind of euphoria being expressed right now across Africa."
Some United Methodists in Africa say they hear U.S. and European liberals lecturing to them on what positions they should take on issues of sexuality, family and marriage, and it strikes them as the latest example of a colonialist attitude.

As conservative congregations had threatened to leave the Methodist fold had the "One Church Plan" been adopted, there are now liberal American congregations and clergy (here's another) who no longer feel welcome. The General Assembly obligingly voted to accommodate their exit.


The UMC also voted to pass a disaffiliation petition, often called a “gracious exit” plan, to help the transition for those who felt they could not remain part of the denomination.
Though all UMC church property is deeded to the regional body, under the new legislation, churches with a two-thirds vote among professing members would be allowed to leave with their property after paying any pension liabilities and outstanding financial obligations.

Which is either an example of Christian charity, or the conservatives telling the liberals, "Hey, don't let the door ya on the way out!"

Since this week's syndicated cartoon hinges on a very obscure reference, I'm going to just come right out and tell you that it's a play on words on a 1973 hymn by Brian Wren, "How Can We Name a Love" (written to the much older tune of "This Is My Father's World") included in the United Methodist Hymnal.

You'd have to ask a Methodist whether Methodist congregations ever sing it. I'm Lutheran, and it's not in any of my hymnals.
Posted by Paul Berge at 7:05 AM