Last month, I explained that the new pastor at my father's church decided to change the title of Dad's column in their newsletter from "Environmental Stewardship" to "Care of God's Creation." As this month's column shows, Dad is getting a bit frustrated.

I was hesitant to post this column, expecting his pastor to suggest he rethink it. But he forwarded to me an email from her that indicates that she is letting him go ahead with this, and let the chips fall, or not, where they may. 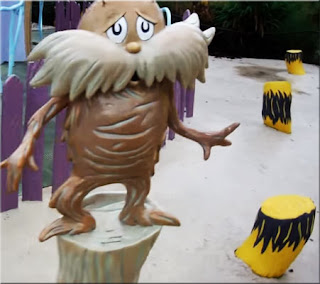 For ten years these columns or essays (I’m never sure which they are) appeared under the heading Environmental Stewardship. For the last six months they have been titled Care of God’s Creation. I haven’t heard a single comment about this change from any member of the congregation other than staff. Does this mean that nobody noticed or that the two phrases have no different connotation?

I can’t remember from whom I may have borrowed the phrase Environmental Stewardship, but for me the Stewardship part was from a paraphrase of the first creation story in Genesis 1:26 in which “dominion” was interpreted as “stewardship.”

The notes in the NRSV, the Lutheran Study Bible, state, “Having dominion is understood as care-giving, not exploitation.” In many other parts of the Bible, stewards are persons who act for the landowners and rulers, often in their absence, and are responsible for keeping things running right. Lutherans are very knowledgeable about stewardship of our money, our time and our talents. Here, I use it to mean stewardship of the air, water, soil, flora and fauna, habitat and everything that is connoted by the environment. It certainly was meant to include Care of all this.

On the other hand, and it may seem petty or limiting, I raise the question whether God’s Creation includes all the ways we have messed up the environment. I accept that God somehow created the entire universe, surely not quite in the ways described in Genesis and probably not by pushing the button for the Big Bang. I also accept the Genesis evaluation that “God saw that it was good.”

What I find very hard to accept is that God created the pollution and mess that we see around us and has been so vividly portrayed in the recent UN report, the sixth Global Environment Outlook. I believe that Environmental Stewards should take Care of God’s Creation and the mess that industrial homo sapiens have made of that creation.

Apparently nobody else worries or cares about the title; the important thing is whether anybody has adopted any of the changes in their lives suggested over the past ten plus years in these essays. If not, then there is no point in taking up this space in the newsletter. The ideas and suggestions are seldom, if ever, mine, but I hope I have brought them to you in a different, interesting and compelling fashion and from a Christian layman’s perspective.

For months, I have had no feedback from any member of the congregation, so I have no way of knowing whether anyone has made changes in their environmental awareness and thoughts, their plans or actions stemming from these essays. You can generally find me standing around during the Sunday coffee fellowship and I would love to hear from you. Or you can email me here.
Posted by Paul Berge at 8:02 AM