Installment II of my caricatures of 2020 presidential candidates: 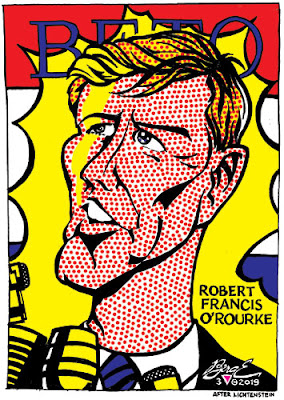 To the best of my knowledge Beto O'Rourke is no relation to the Kennedy clan, but the man looks like he ought to be. I learned the other day that his given name is Robert Francis, exactly the same as Bobby Kennedy, and quickly conceived this parody of Roy Lichtenstein's pop-art portrayal of RFK that appeared on the cover of Time magazine's May 24, 1968 issue.

Lichtenstein's work has been derided as derivative, which makes this caricature doubly so. The large ben-day dots are a leitmotif of Lichtenstein's work, and not here some effort to tie Mr. O'Rourke to the anti-vaxxer movement.

I don't use or have ben-day dot technology, so I had to add each and every one of those blasted dots individually. During the course of which, I had to leave for several hours and returned to find that Photoshop apparently prevents my computer's screen saver and energy saver settings from taking effect.

Happily, I don't have the half-finished drawing burned into my screen.

At any rate, until this week, I had simply assumed that the man's given name was Beto, perhaps being a simplified spelling of a traditional Irish name. The Gaelic spelling would probably have turned out to be Beitgeaughe, but pronounced the same. He was born in 1972, at which time American parents had begun ditching common names like John and Mary in favor of ethnically telling names like Siobhan and Aksel. (If they had WASP heritage, the kids ended up with names like Sunflower and River.)

But I suspect that Beto sharing the name Robert Francis with RFK was no coincidence, and that makes it ethnic enough.
Posted by Paul Berge at 6:30 AM