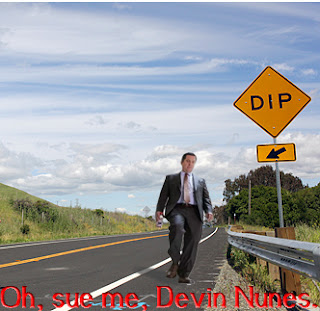 Trump errand boy Devin Nunes (R-CA, and a co-sponsor of the 2017 "Discouraging Frivolous Lawsuits Act") has decided to sue Twitter over some users making fun at his expense.


What horrible things did these accounts say about Nunes to warrant the judiciary’s intervention? The account named “Devin Nunes’ Mom” receives the most attention in the complaint. Its owner frequently posted caustic remarks about him and his actions toward the Russia investigation. One tweet said that Nunes was unfit to run the House Intelligence Committee, while another joked that he was “voted ‘Most Likely to Commit Treason’ in high school.” Some tweets are indistinguishable from legitimate political criticism. Others are more puerile, implying that Nunes wanted to commit sexual acts with Trump and other top Republicans.

Twitter had already suspended the "Devin Nunes' Mom" account — for impersonating a real person, not for materially damaging Mr. Nunes. How the congresscritter intends to prove real damage is hard to fathom. He's a public figure, which makes him fair game by any interpretation of the concept of free speech, and he volunteered for the damn job.

Mr. Nunes might want to read up on Hustler Magazine Inc. v. Falwell someday. In the meantime, he's pretty much inviting the rest of us to pile on.
Posted by Paul Berge at 10:25 PM