At the start of the lunch hour on Thursday, September 16, 1920, a horse-drawn carriage blew up in front of the J.P. Morgan & Co. offices at the corner of Wall Street and Broad Street. The blast killed 38 and injured hundreds more, the most casualties of any peacetime attack in the U.S. up to that date (but superseded the following year by the white race riot in Tulsa, Oklahoma). 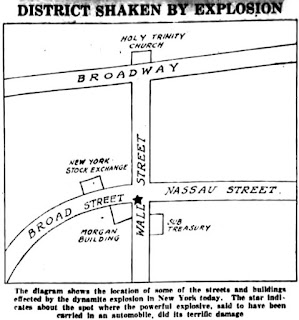 There was no claim of responsibility, but suspicion immediately fell to anarchists and communist sympathizers, who became the focus of Attorney General Palmer's investigation.

The bomb was found to have been made of TNT and the iron weights commonly used for window sashes, connected to a timer; investigation into window sash weight makers all over the U.S. yielded nothing. One Pietro Angelo, who was connected with a bombing the previous year, was able to produce an alibi but was deported to Italy anyway. Another suspect was champion tennis player Edwin P. Fischer, who had made earlier warnings to friends predicting a mid-September Wall Street explosion; but it turned out that he happened to be in Canada that day and had developed a habit of making similar predictions.

As for a motive for the bombing, a theory that it was an assassination attempt against J.P. Morgan was discounted because the banker was in Europe (although his son Junius was injured and his chief clerk, William Joyce, was killed). The bombing may also have been an attempt to rob a scheduled shipment of 900 gold bars to the U.S. Treasury building next door; if so, it failed in its mission.

The FBI and Secret Service eventually dropped the investigation in 1940; the bombing remains unsolved to this day.