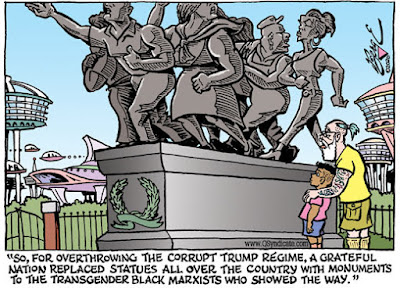 Retired Congresscritter Michele Bachmann (R-Oort Cloud) was on the radio last week, claiming that "transgender Black Marxists" are trying to take down the United States government.

"These are transgender Marxists — transgender Black Marxists — who are seeking the overthrow of the United States and the dissolution of the traditional family," Bachmann said in the interview on The Victory Channel, televangelist Kenneth Copeland's right-wing Christian network, while discussing the Black Lives Matter and anti-racism protests taking place around the country.

Mrs. Bachmann may be safely out of the halls of Congress, but lest you congratulate the American electoral system for shedding her and fellow batshit crazy ass Steve King, let me remind you that Louie Gohmert, Jim Jordan, and Matt Gaetz ain't going anywhere. At least one solid GOP district in Georgia and another in Colorado are poised to send a QAnon conspiracy-spewing mouth-breathers to Washington to augment the GOP's loony bin caucus this November.

President Donald Berzelius Trump, crackpot extraordinaire, is not a bug of the Republican machine but a feature (as Daily Cartoonist columnist Mike Peterson is wont to note). The party was heading this way before Sarah Palin, even before Dan Quayle.

Republicans have ridiculed intelligence at least as far back as 1950's (Adlai Stevenson is an egghead!), attaching ever-increasing value to ignorance and superstition. From insisting that creationism is equally valid as empirical science, to believing that natural disasters are evidence not of climate change but of God's homophobia, it's barely a bunny-hop of faith to accepting that injecting bleach will cure disease.

All the scientific evidence to the contrary can't hope to refute "I don't think science knows, actually" from our willfully ignorant president and his doggedly ignorant followers. These are people who still believe the out-and-out lie that Barack Obama is a Muslim born in Kenya in spite of all the proof that he isn't and in spite of the complete lack of a shred of evidence that he is. They happily swallow and regurgitate the absurd notion that Democrats are drinking the blood of children in the crawl space below a pizza parlor because immortality flat earth trickle-down economics.

I tell you one thing, though: when the transgender Black Marxists do take over, they're going to have a big challenge before them if they try sending all those Trumpletons to reeducation camps. Which they will do, being Marxists, of course.

You can't reeducate someone who was impervious to education the first time around.