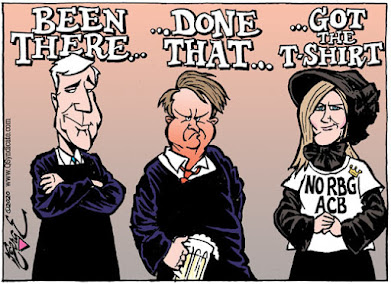 Hard to believe, but it was less than a week ago that Donald Joffrey Trump named Amy Coney Barrett as his third nominee to the Supreme Court.

During Tuesday night's sh!tshow, Trump argued that he gets to fill Ruth Bader Ginsburg's seat, even as votes are being cast in the 2020 presidential election, because he was elected president in 2016 for four full years, not three. It's the same argument that Democrats used four years and eight months ago, because Barack Obama was elected president in 2008 and reelected in 2012 for eight years, not seven.

And yet there is Neil Gorsuch, sitting comfortably in Merrick Garland's seat.

Well, as we've already discussed, it's patently obvious that Republican arguments as to who gets to name whom to the Supreme Court in an election year are nothing but self-serving. Republican presidents get to do it, Democrats don't.

As if Mrs. Coney Barrett's nomination were not enough of an affront to the legacy of Justice Ginsburg, Republicans instantly commandeered the late Justice's nickname and cranked out "Notorious ACB" t-shirts for their faithful throng.

To paraphrase a memorable moment from a gentler era's debate, we knew RBG. RBG was a friend of ours. You're no RBG.