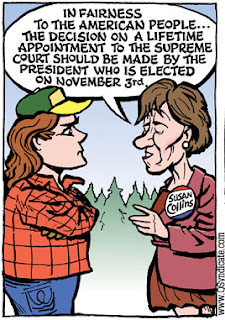 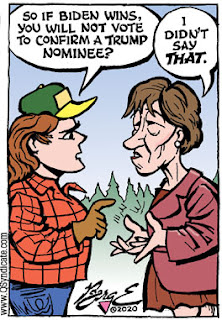 Today's cartoon quotes from a tweet by Republican Senator Susan Collins over the weekend: 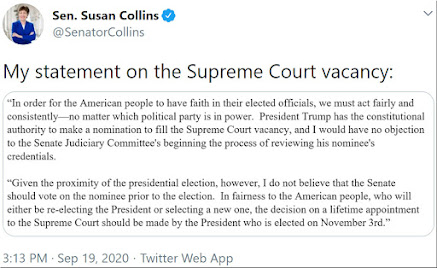 But Senator Collins has racked up such a long history of raising the hopes of liberals and moderates only to dash them when time comes for her to act, I thought there was every likelihood that she would knuckle under to Republican Party Orthodoxy in the end.

So yesterday, Collins did say that she wouldn't vote for whomever Trump nominates.

The catch to what Collins said yesterday is that she hasn't — yet — said how she'd vote on a Trump nominee after November 3. She's merely against voting before the election. Voters in Maine may wish to know how she intends to vote, especially if Joe Biden were to beat Donald Trump, before they decide whether or not to vote for her.

The handful of Republican moderates in the Senate may recognize their ethical dilemma, but they are vastly outnumbered by doctrinaire Republicans who have been salivating at the prospect of a permanent Republican majority on the Supreme Court for over half a century.

Doctrinaire conservatives still have difficulty coming up with a coherent explanation why refusing to give any consideration to President Obama's nomination of Merrick Garland nearly a year before the next presidential inauguration was a matter of constitutional principle, and so is confirming whomever Trump nominates with just a month and a half until the next election.

As recently as July, Sen. Chuck Grassley, chair of the Senate Judiciary Committee back in 2016, told reporters that if he were still the committee chair this year and a Supreme Court vacancy occurred, “I would not have a hearing on it because that’s what I promised the people in 2016.” Now that it's September and that vacancy is reality, he's content to let Mitch McConnell and current committee chair Lindsey Graham have hearings and a confirmation vote if they want.

Sen. Ron Johnson, whose position in 2016 was, "In the politicized atmosphere of an election year, you probably shouldn't even nominate someone. It's not fair to the nominee, it's not fair to the court," now claims that having a Senate majority of the same political party as the president has de-politicized the atmosphere this year. Or something like that.

Sen. Ted Cruz was on CBS This Morning yesterday morning and offered the idea that since the 2020 election might go to the courts, it's imperative that it not be possible for the Supremes to split 4-4. He didn't offer any explanation why that possibility was acceptable in 2016.

Here's what other Republican senators were saying in 2016:

“I don’t think we should be moving forward with a nominee in the last year of this president’s term. I would say that even if it was a Republican president.” — Sen. Marco Rubio.

“I think we’re too close to the election. The president who is elected in November should be the one who makes this decision... Our next election is too soon and the stakes are too high; the American people deserve a role in the process as the next Supreme Court justice will influence the direction of this country for years to come.” — Sen. Cory Gardner, interview on KNUS radio

“I believe the American people deserve to have a voice in the selection of the next Supreme Court Justice, and the best way to ensure that happens is to have the Senate consider a nomination made by the next President.”—Sen. John Cornyn, official statement

“We will see what the people say this fall and our next president, regardless of party, will be making that nomination.”—Sen. Jodi Ernst

But the poster boy for principle whiplash is Sen. Lindsey Graham, who said four years ago:

“I want you to use my words against me. If there’s a Republican president in 2016 and a vacancy occurs in the last year of the first term, you can say Lindsey Graham said let’s let the next president, whoever it might be, make that nomination.”

Turns out there's a simple explanation why you shouldn't use Lindsey's old words against him, though. Those nasty Democrats were mean to Brett Kavanaugh over some silly old sexual harassment allegations, so naturally, Lindsey's panties have been in a wad ever since.

And after Republicans were so polite to Merrick Garland!