Set Your Clocks Back 100 Years 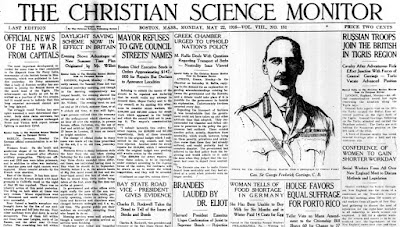 Welcome once again to Springback Saturday, with breaking news from a century ago. The Christian Science Monitor of May 23, 1916, takes front page note of a newfangled "scheme" just underway in Great Britain:


LONDON, England, Monday - Pleasantly named, the Summer Time Act was initiated yesterday morning, and though in the morning comparatively few reaped benefit, the evening showed the advantage of the scheme originated by Mr. Willett. The evening went on and on and at 10 o'clock, summer time, or at 9 o'clock old time, it was still light; some persons realized then the economy of the arrangement which shortens by an hour all over the country, in private houses, offices, factories, etc. the use of fuel and artificial light. Of yesterday's 23 hours in London, 13 were on record as bright sunshine.
The change of official clocks in many cases was made at the time prescribed by the act, 2 a.m. old time, yesterday morning.
Business firms in many instances stole the hour from the sun when closing Saturday for the week end and in Kingsway three clocks recorded three different times, one individual having done in May what he should do in September. Shortly before 2 a.m. the minute hands of Big Ben raced round 66 feet and the hour hand round five feet of clock surface in record time, little notice being taken of the feat, since Big Ben does not strike at present.
In government and other offices with night staffs the pace of the sun was quickened at the same time, while, generally speaking, clocks in railway stations and factories and elsewhere were changed between midnight and 2 a.m. old time. The general public put their watches on overnight, excepting those who forgot to do so.
Morning services were well attended, though a number of persons arrived as services were finishing.
Yesterday and today are beautiful summer days, and no better could have been selected to show the benefits of the Willett scheme and to prove the truth of the poet's maxim that the best of all ways to lengthen our days is to steal a few hours from the night.

The Mr. Willett mentioned in the article was builder William Willett, who wasn't the first person to propose Daylight Saving Time, but advocated strenuously for it from 1905 until his death in 1915, upset at never having enough time in the evening to get in a complete round of golf. Parliament took up the idea in 1908, although it never got anywhere until World War I upped the ante by crimping the coal supply. 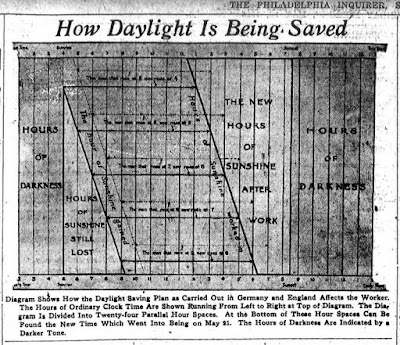 As this diagram from the May 28, 1916 Philadelphia Inquirer points out, the Axis Powers had already been employing Sommerzeit since the beginning of the month. Both sides of the Great War returned to "old time" on September 30, which was nice and considerate of everybody. It wouldn't have been sporting for one side to continue waking up an hour ahead of the other.

Since this blog is supposed to be about cartoons, here's John McCutcheon's cartoon about Daylight Saving Time for the Chicago Tribune on May 23, 1916: 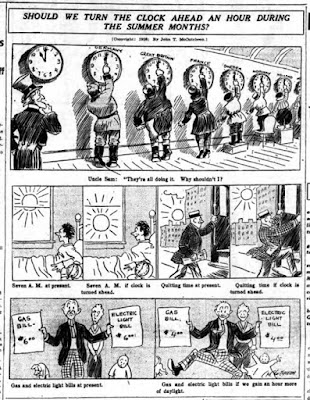 Little could he know that 100 years later, we'd be rousing ourselves out of bed in the dark in March and November, burning up those savings on the gas and electric bill.

McCutcheon's cartoon is arguing in favor of a newfangled idea, which generally isn't great fodder for an editorial cartoon. We're much better at poking fun or expressing outrage at things through reductio ad absurdum, taking ideas to their logical extreme. If we're in favor of an idea, we ridicule the alternative. Sticking with telling time the way we always had, however, hardly seems open to lampoon or exaggeration.

I did try hunting up a cartoon with a more skeptical view of Daylight Saving Time; but with the race for the Republican presidential nomination wrapping up, the Punitive Expedition in Mexico bogging down, and the ever-present issue of Preparedness dragging on, I guess most American cartoonists thought there were more pressing things to draw about that week.
⌚
P.S.: You may have noticed the Monitor headline about "equal suffrage for Porto Rico." No, the House was not endorsing statehood for the American territorial possession, but that women there should have the same voting rights as Puerto Rican men.