Q Toon: The Ayes Had It 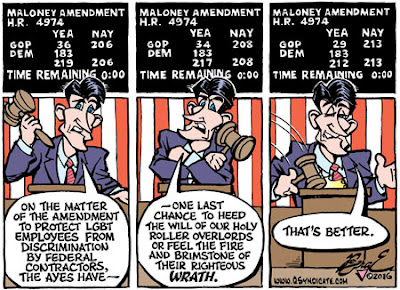 This past week, we were treated to the sausage-making spectacle that is the United States House of Representatives. Rep. Sean Maloney (D-NY) offered an amendment to a defense spending bill to require that defense contractors not discriminate against LGBT employees — writing into law an already existing executive order of the Obama administration.

In light of the healthy number of major corporations already having come out in defense of their LGBT employees (and prospective hires) after legislatures in Indiana, Georgia, North Carolina, Mississippi and elsewhere pushed bills to legalize antigay discrimination, you would think the Maloney amendment would be a no-brainer. In fact, a majority in the Republican-dominated House of Representatives seemed to think so, too.

When time for the vote had run out, the Maloney amendment had the votes to pass. But then Republican leaders, horrified by the prospect that some antigay wedding cake baker somewhere might lose his defense contract, kept the vote open so that they could pressure enough Republican "aye" votes to switch to "nay" to defeat the amendment.


The identities of the seven vote-switchers were not publicly recorded on the House floor. The amendment failed 212-213. Democrats in the House were in an uproar, shouting "Shame, Shame, Shame," and Minority Whip Steny Hoyer protested because the presiding officer did not require that the members record the changes.
Later, Hoyer's press office tweeted the names of seven Republicans who he believes switched their votes.
They include California Reps. Darrell Issa, Jeff Denham, David Valadao, and Mimi Walters; Oregon Rep. Greg Walden, Iowa Rep. David Young and Maine Rep. Bruce Poliquin.

Hoyer's beef is with a breach of the rules of the House:


Once the time period allotted to a vote has expired and the voting is closed, the results and individual positions cannot be changed. In the House, it’s customary for Representatives to file “Personal Explanations” explaining missed votes, or votes they entered incorrectly. These don’t permit lawmakers to actually change a vote or record one after the fact. They are statements of intent that lawmakers can point to and say, “Here’s how I would have voted.”

Members can change their vote before time expires by presenting a card to the tally clerk. That wasn't done in this case.

Republican House leadership has responded to Rep. Hoyer's complaints by promising to require that amendments be "pre-printed." The new rules give Ryan and pals time to pre-instruct their members how to vote.
Posted by Paul Berge at 7:40 AM