Political commentary on the comics page didn't start with Prickly City, or Doonesbury, or even Pogo; it dates all the way back to the very beginning with Yellow Kid. We're not going back quite that far today, however, as Soapboxback Saturday takes another look at the Sunday Funny Pages of a century ago.

A.E. Hayward was the nom de cartoon of Alfred Mark Hayward (1884-1939). Hayward used the "E" — for Earle — to distinguish his cartooning work from his "serious" painting. He had a penchant for punny names in his cartoons; His most successful strip was "Somebody's Stenog," which he drew from 1918 until his retirement in 1933, centering on the foibles of a stylish blonde stenographer deceptively named Cam O'Flage.

From 1915 to 1918, he drew "Colonel Corn" for the New York Herald Syndicate about a self-important aspiring politician with plenty of ambition but no particular aptitude. The colonel was introduced on October 24, 1915, without his last name, deciding to launch his political career by getting appointed to the police department — the clear implication from Panel One being that his family would be better off were he to apply himself to some honest work. 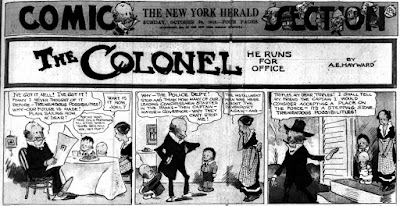 It can't have been a coincidence that his career plans echoed that of a certain Col. Theodore Roosevelt, although Joel Corn still hadn't attained the first rung of the ladder by the time he took aim at the 1916 presidential contest. 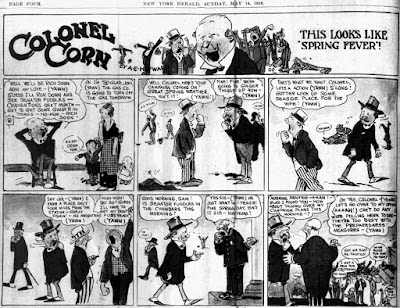 At this point 100 years ago, incumbent Woodrow Wilson was unopposed for renomination as the Democratic nominee for President. A win in the Oregon primary over auto manufacturer Henry Ford was sealing the Republican nomination for Supreme Court Chief Justice Charles Evans Hughes, who had been touted as a possible Republican nominee since 1904. The candidate of the party's Old Guard had been Elihu Root, but at 71, the former Secretary of War decided that he was too old to run. Former President Teddy Roosevelt had returned to the Republican Party and was making speeches around the country as if he were a candidate; he would turn down the Progressive Party nomination when it was offered to him. 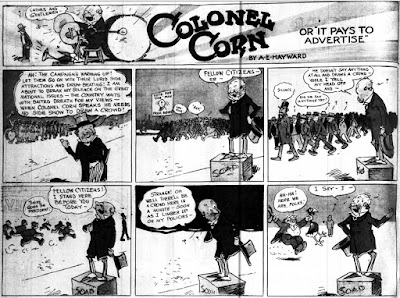 In the May 21 episode above, Hughes is the candidate who "doesn't say anything at all and draws a crowd"; as Chief Justice, he wasn't yet actively campaigning on his own behalf. Former President Teddy Roosevelt produces the "whiskered nut-eating bird" (while Secretary of State William Jennings Bryan shows off his "eclair-eating peace eagle"), a reference to Roosevelt having returned from a trip to the West Indies with a guácharo, proclaiming it as his own discovery in spite of its existence already being well documented.

I guess the whiskered nut-eating bird briefly stood a chance of joining the political cartoonists' bestiary with elephants, donkeys and bull meese. It reappeared in the following Sunday's episode of Colonel Corn, and in this cartoon by the New York World's Rollin Kirby:
"Throwing one's hat in the ring" is a boxing-based cliché for declaring oneself for public office, and there are lots of cartoons showing piles of hats in a ring on the ground. I had never seen the hat-in-the-ring cliché depicted this way before running across the May 28 episode, however: 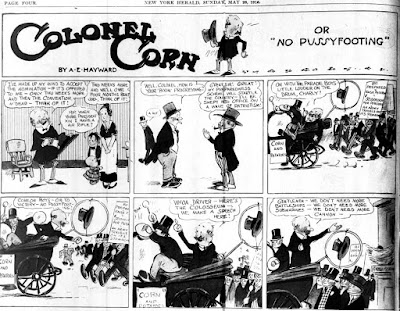 Ultimately, the popularity of the whiskered nut-eating bird was no match for that of the Teddy Bear. For which, generations of toddlers should be eternally grateful.