Q Toon: In the Flesh

This Sunday, Ted Cruz spoke up in support of North Carolina's HB2 and other "Bathroom Bills" on NBC's Face the Nation and Today Show. 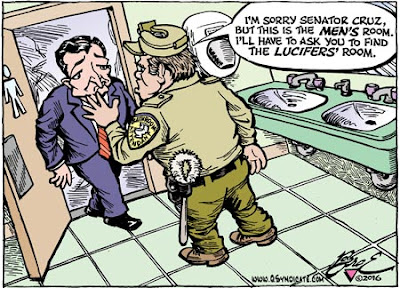 It didn't help him in the Indiana primary, in a state which has already gone around the track on LGBT rights issues.

Well, I for one am glad that Ted Cruz's presidential campaign is down the toilet.

In February, I drew a cartoon portraying A Voice From Above holding up Cruz as the only, but worse, alternative to Donald Trump — only to have Cruz fall to third place in New Hampshire behind the Great White Bread Hope, John Kasich. I drew this week's cartoon over the weekend only to have Lucifer in the Flesh drop out of the race before any of my weekly papers could hit the newsstand.

Plenty of time for my next cartoon about him to get from inkwell to recycling bin.
Posted by Paul Berge at 8:29 AM