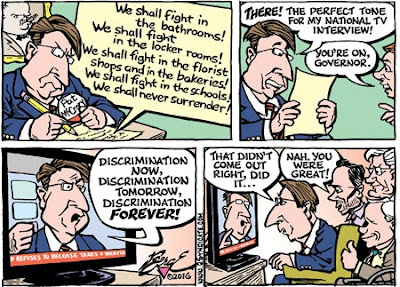 I ran across somebody's complaint recently about focusing so much LGBT attention on the bathroom clauses of these bathroom bills in North Carolina, Mississippi, and elsewhere. We're not paying enough heed, the argument went, to the "religious liberty" clauses creating the right of wedding photographers, bakers and florists, not to mention therapists, pharmacists paramedics, and tow truck operators to discriminate against gays, lesbians, and bisexuals.

To which oversight, I suppose, transgender persons must sympathize. Through the years they've been quietly dropped from various efforts to win LGB folks rights to equal employment, military service, marriage, and so on.

So, anyway, I've managed to include the bakers and florists in panel one.

In my home state of Wisconsin, state representative Jesse Kremer, R-Kewaskum, has reintroduced his bathroom bill, claiming that it's purely needed to criminalize the heretofore legal activity of sexually assaulting children in public bathrooms, and that it isn't aimed at transgender lavatory customers at all.


"There have been individuals in society for hundreds of years that believe they are a different gender. That's not the problem here," Kremer said. "The problem is that there are going to be people that are going to take advantage of the situation."

His protestations might carry more weight if we hadn't been equally assured that Republicans' voter ID laws had nothing to do with thwarting Democratic voters, and that Act 10 had nothing to do with breaking unions. We've become inured to the repeated spectacle of Governor Snotwalker telling us some right-wing agenda item is "not a priority" only to have him sign it into law within the week. I just can't believe you guys. Ever.

🚽
Nationally, Kremer and his ilk are the same people who complain that their rights are being trampled upon if someone wishes them Happy Holidays or offers them the choice of whether or not to marcar dos para español. Keep that in mind whenever they pretend that their efforts to write discrimination into the law have nothing to do with the people they want to discriminate against.
Posted by Paul Berge at 11:13 AM