Lo and behold, it's Sweet’16back Saturday again! Last Saturday's post included a cartoon by Frank O. King, who would later go on to create the long-running comic saga, "Gasoline Alley" — as Pierre Couperie and Maurice Horn describe it in A History of the Comic Strip," "the first Bildungsroman in pictures."

I mentioned that in 1916, in addition to his Sunday funnies page comic, "Bobby Make-Believe," King also drew a full-page black-and-white comic on Sundays titled "The Rectangle." I decided to look that cartoon up for this week's look back, and found that the top half of the Rectangle for May 7, 1916 takes a very light-hearted look at the war in Europe. (You may recall that a couple weeks earlier, the Tribune had run a front-page editorial cartoon by John McCutcheon seeming to pitch the war as if it might be a jolly adventure; that must have reflected editorial policy at the Trib. After the War, the paper would turn isolationist under editor Col. Robert P. McCormick.) 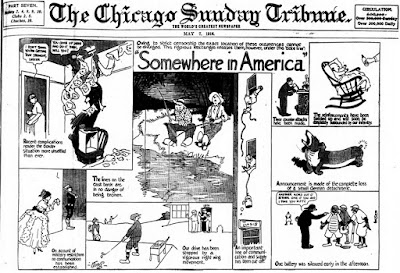 As promised, I'm cutting these cartoons up so that you, dear reader, may be able to embiggen them enough to enreadify them. So here's the bottom half of the cartoon: 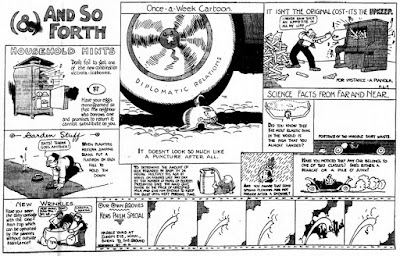 In researching last week's post, I was rather surprised to find that The World Encyclopedia of Cartoons by the same Maurice Horn who co-authored A History of the Comic Strip has no entry for Frank King or "Gasoline Alley" — although it does have entries for "The Rectangle" and for King's successor at Gasoline Alley's drawing board, Richard Moore. (The World Encyclopedia of Cartoons had no entries for any of the other cartoonists sampled last week, either; and of their cartoons, only an entry for "The Katzenjammer Kids" as an animated cartoon.)

The WEoC states that "The Rectangle," syndicated to several newspapers around the midwest, was an immensely popular feature, and I would venture to guess that it was more popular than "Bobby Make-Believe." Adults could relate to it, whereas the Tribune Sunday Funnies weren't necessarily targeted to adults in the first place.

The installment of "Bobby Make-Believe" on May 7, 1916 finds Bobby still fantasizing about beating up the delivery man from the week before in order to impress the girl next door:

Dream on, Bobby. Your days are numbered.
Posted by Paul Berge at 7:30 AM