While I was away on vacation this month, there was a clash of competing First Amendment rights at the University of Missouri at Columbia. Because I was not closely following the news, I hadn't seen much about the racial tensions at UM-C that precipitated events; but I did see accounts of how the student athletes, by threatening to forfeit UM-C football games, forced the resignation of the university president and the chancellor.

But the protesters weren't done protesting -- although it turned out that they really objected to having their protest reported on:


First, a video surfaced of faculty, staff and students berating journalists and physically trying to remove a photographer from a public area on campus where protesters with the group Concerned Student 1950 set up a campsite.
Video showed the director of Greek Life, Janna Basler, screaming at a photographer to leave the area and later showed her and others physically forcing the journalist to back away from the campsite, even as the photographer noted his First Amendment right to be there. The same video showed an assistant professor of mass communications, Melissa Click, calling for "muscle" to help her eject the student journalist filming them and appeared to show her grabbing at his camera.

I'm too far removed to comment intelligently on the Mizzou protests, but I was reminded of a racially charged protest from my own college days 35 years ago. 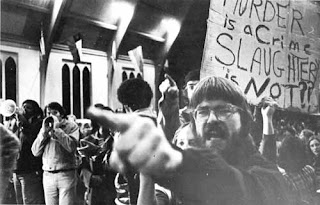 On the evening of Ian Smith's speech, protesters, some from largely Republican St. Olaf, and many from the much more liberal Carleton College across the river, armed with bullhorns and picket signs, took over the aisles of the chapel. Yelling accusations of murder against Smith and his racist regime for nearly an hour, they completely prevented the former head of state from speaking. [A classmate reminds me that the chant was "Ian Smith, you can't hide! We charge you with genocide!"] 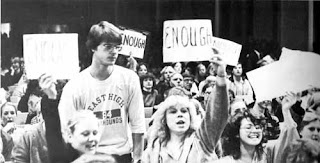 That's my hand holding up the clipboard I'd brought to sketch on, there behind the fellow standing from East High. I was holding it up as a silent counter-protest, but others took up the idea and started adding to the raucous din by chanting "EE-NUFF! EE-NUFF!" 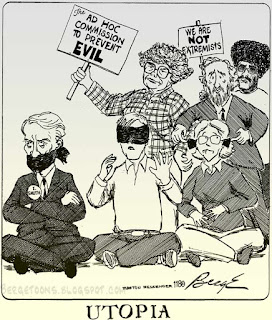 By that point, however, the original protesters had already succeeded in chasing Mr. Smith from the chapel to a small room in another building where the president of the Political Activities Committee had a one-on-one interview with the international pariah. Video of the interview was available to watch then next morning, and it was neatly summarized in the student newspaper.

But the rest of us who had questions we wanted to ask the disgraced former Prime Minister never got to ask them. So free speech won out that night, and free speech also lost.

Which is the way of things in an all-or-nothing environment. Whether it's so-called political correctness on campus, the politics of personal destruction, or a campaign season in which a candidate can propose having the U.S. government shut down places of worship and shadow everyone of that religious faith, and he can still be considered a front-runner, that's where we are today.
Posted by Paul Berge at 12:56 PM