You'll have to pardon me for not drawing turkeys and pilgrims today. This week's cartoon concerns a curious statement by actress Cate Blanchett, which probably requires some explanation:


Discussing Carol, her new film based on Patricia Highsmith's novel The Price of Salt, which chronicles a love affair between two women in 1950s New York City, Blanchett told the press at Cannes that Carol’s “sexuality is a private affair,” adding with perceptible disdain: “What happens these days is if you are homosexual, you have to talk about it constantly; it has to be the only thing; you have to put it before your work, before any other aspect of your personality.” Perhaps Blanchett was decrying conservative culture’s obsessive focus on sexual identity over other meaningful aspects of personhood. Or perhaps not. In the Variety article, her words similarly smacked of scorn: “[Carol’s] sexuality isn't politicized. I think there are a lot of people that exist ... who don’t feel the need to shout it from the rafters.” 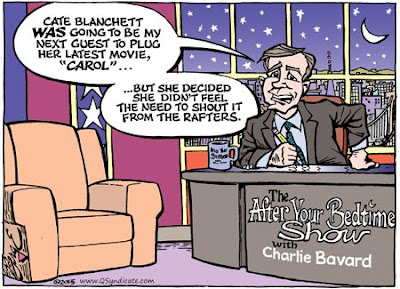 I wouldn't suggest any particularly deep reading into this week's Q Syndicate cartoon, aside from the trivial fact that the name of my fictional late-night TV host is based on the Spanish and French words for "chat."

When I drew this cartoon, I had no idea that one Justin Bieber would be a no-show on Colbert's show, so that's neither here nor there, too.

✒
Have a happy Thanksgiving, and don't overdose on football or L Triptophan!
Posted by Paul Berge at 7:19 AM